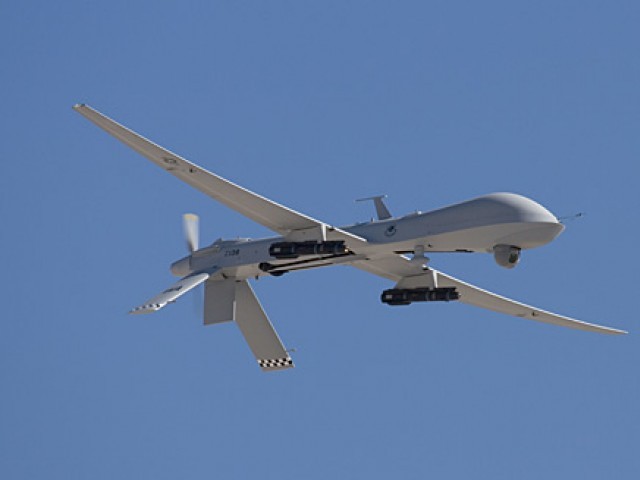 A security official said that pilot-less aircraft fired six missiles at three compounds around 4am in the Dargah Mandi area, two kilometres north of Miramshah, the headquarters of North Waziristan. The area is considered a stronghold for the Haqqani Network. The strike flattened the structures and triggered a fire which burnt everything to ashes.

“US drones fired six missiles which hit three separate compounds in two villages,” the official told The Express Tribune. He added that at least six militants were killed in the blitz. However, he didn’t identify the fatalities nor did he say anything about their nationalities.

The attacks took place minutes apart. Two drones fired four missiles in the first strike, then a third drone fired a further two missiles in the second attack, the official said. Another senior security official confirmed the strike and told AFP that a vehicle parked in one of the compounds was also hit.

This is the second drone strike this month. At least six militants were killed on June 11 when a remotely piloted aircraft targeted a vehicle also in North Waziristan.

Washington reportedly suspended its drone programme in December to give Islamabad time to pursue a dialogue process with the TTP. However, the nascent peace process was shattered when the Taliban launched an attack on the Karachi airport on June 9 that left dozens dead.

The US resumed the programme last week, days after the Karachi attack, with two strikes in the same village of Dargah Mandi, killing at least 16 militants.

Like the previous strike, foreign ministry spokesperson Tasnim Aslam termed the US drone program as violation of its territorial integrity and sovereignty. “These strikes also have a negative impact on the government’s efforts to bring peace and stability in Pakistan and the region,” she said in a statement. Some 2,171 people have been killed in drone attacks since August 2008, according to an AFP tally.