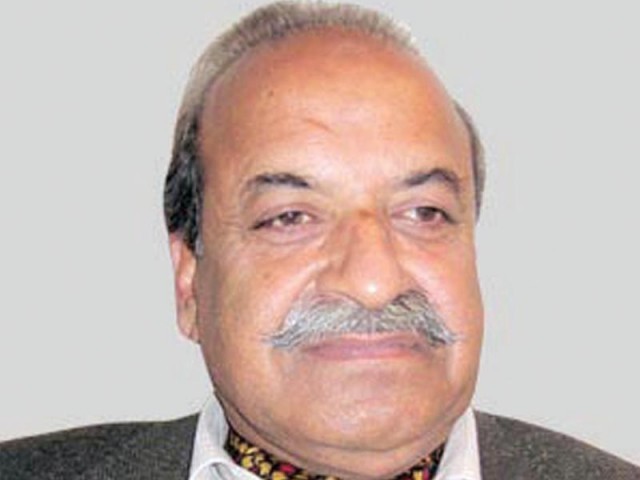 “Let me make it clear in short. Today, at this critical stage, everyone is not only on the same page but committed to the war against terror and stand by the armed forces,” Abbasi told journalists at Governor House.

PESHAWAR: Khyber-Pakhtunkhwa (K-P) Governor Sardar Mehtab Khan Abbasi on Monday made it clear the military and political leadership was on the same page regarding the military operation in North Waziristan Agency (NWA) which he said would last some days, not months.

“Let me make it clear in short. Today, at this critical stage, everyone is not only on the same page but committed to the war against terror and stand by the armed forces,” Abbasi told journalists at Governor House.

He said North Waziristan has been sealed and the border with Afghanistan is being observed closely, adding the offensive will be a focused, short-term onslaught. “It will take days, not months to clear the area. Our army will root out militancy and tribesmen will stand by our armed forces to eliminate the last militant.”

He said different militant outfits along with foreign fighters operating from outside the country had united under the umbrella of the Tehreek-e-Taliban Pakistan (TTP) and that tribal areas, particularly North Waziristan, were paralysed.

Abbasi said the K-P government was taken on board regarding the offensive, adding drone attacks also halted during the peace talks. He, however, lamented militants continued with their activities even during the ceasefire and that 23 Frontier Corps personnel were abducted and killed besides other terror plots.

The governor said despite attacks all over the country, the military leadership met elders from North Waziristan and asked them to clear the area of foreign militants under the collective responsibility clause of the Frontier Crimes Regulation.

“Despite having initiated talks and the efforts of the NWA tribesmen, TTP claimed responsibility for the Karachi airport attack. It was now time for decisive action to teach them (militants) a lesson and thus Zarb-e-Azb was launched.”

Replying to a question, the governor said he hoped Afghanistan would not encourage militancy since it was not in its interest either. He said a cell and control room has been set up at the FDMA to monitor the operation and assist displaced persons, adding polio vaccination campaigns will also be conducted for the displaced people.