Pen’s prowess: Wriggle out of ‘the rest’ say writers

Pen’s prowess: Wriggle out of ‘the rest’ say writers 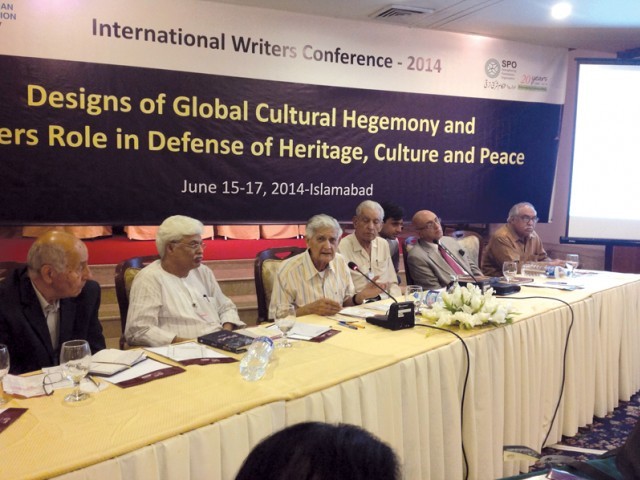 ISLAMABAD: Though the so-called ‘east’ has long been freed from the clutches of the colonisers, eastern minds have yet to be decolonised. Hegemony is a state when one willingly adopts certain features or practices of another culture accepting its supremacy, said linguist Dr Tariq Rahman at a delegates meeting of the International Writers Conference 2014 here on Sunday.

The three-day conference, “Designs of global cultural hegemony and writers’ role in defense of heritage, culture and peace”, organised by the African-Asian Writers Union (AAWU) Pakistan Chapter in collaboration with Strengthening Participatory Organisation will continue till Tuesday.

Explaining the term ‘hegemony’ further and pointing out a catch, Dr Rahman said that while rejecting a foreign culture, we also reject all the positives of that culture. “We lose sight of the enlightened parts of a culture,” which eventually helps the oppressors of minorities’ rights, as in Pakistan’s case, women’s rights are termed as western concepts, he said, adding we must salvage universal values which belong to no particular culture.

People had coined terms in their local languages for objects such as aeroplanes and submarines, which to Dr Rahman, are examples of the dynamism of language and people’s will to stay relevant. The state, he lamented, has invested in Urdu to establish its hegemony over scores of other national languages.

“There is a potential to stop,” Rahman opined referring to the writers’ role, “if not reverse the trend of cultural hegemony.”

The conference was scheduled to begin at 9am but could not start till the clocks struck 12. The delegates, having seemingly overslept, did make up for the lost time and delivered short but relevant speeches before breaking for lunch.

Before the welcome address by Dr Anwar Ahmed, the organisers played a sufi number “jis din thanian aper khidsan ratte sooe phul, us din mil sun (the day red and crimson flowers bloom, we will meet that day) — a beautiful translation by Ahmed Salim of a song originally penned by the legendary Sheikh Ayaz. “This is no different from my own music,” commented Egyptian writer and AAWU Secretary-General Dr Mohamed Salmawy in his speech later on.

Dr Salmawy said, “People in the third world have similar issues, aspirations and dreams,” and he likes to be part of any initiative that helps people from these regions “exchange ideas and compare notes.” “The topic [of the conference] hits the nail on the head,” he said.

Globalisation would have been a good occasion, he mused, if all cultures had a chance to flourish under the sun. “Western hegemony is sold to us under the name of globalisation,” he commented. “It is time for writers to get together and stand up against this.”

The AAWU, headquartered in Cairo, Egypt, was established in 1956. Poet Faiz Ahmed Faiz was among its founding members. The leaders of the Non-Aligned Movement had helped establish this organization, in Dr Salmawy’s words, to institutionalise efforts to stand up against hegemony.”

“Our elders realised that without the writers, protection and assertion of identities of local people will not be possible,” said Salmawy.

“We are trying to include Latin American writers in the organisation as well. Success will depend on how many local chapters we have in various countries.”

Pakistan is the first AAWU member to set up a chapter. AAWU President Dr Ali Javed formally inaugurated Pakistan chapter of the union in today’s meeting.

Dr Ghazala Rahman in her presentation referred to the “local hegemony” she faced while starting Sindhi class in the SZABIST University in Karachi. An interesting point in her presentation was that the sense of cultural loss that Sindhis felt in the 40’s and 50’s was no different from what they feel today. Why was it so, asked Dr Ghazala.

According to her, there is no other language where people are writing about linguistic genocide or hegemony as in Sindhi. “Sufi Islam and not strident Islam is what Sindh ascribes to,” she jubilantly said, offering prospects of peace for around a quarter of the country’s population.

Afro-Asian Peoples Solidarity Organisation President Dr Helmi Al Hadidi of Egypt said, “We are not writers alone. We have to be fighters to help the human beings to be really human.”

Quoting a book titled, “The West and the Rest”, which lumps the whole of world, save Europe and North America, as “the rest”, he asserted, “Every culture has something to teach to us. This forms the basis for stronger solidarity among the eastern nations,” and offers a chance to avoid being clubbed among “the rest.”