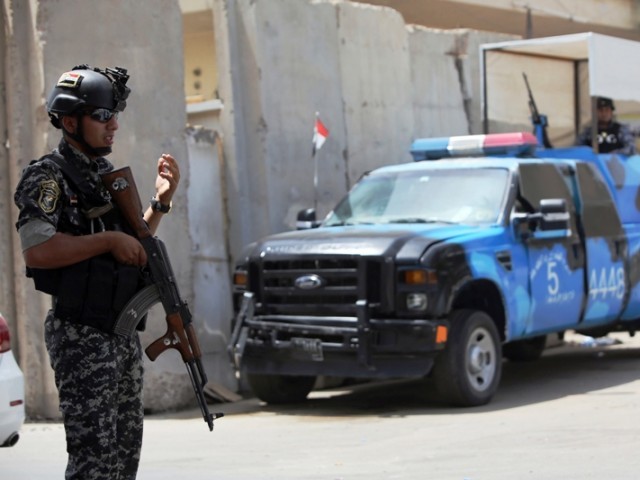 Iraqi policemen man a checkpoint in the capital Baghdad on June 12, 2014, as rebels and anti-government fighters have spearheaded a major offensive that overrun all of Nineveh province. PHOTO: AFP

BAQUBA: Iraqi forces clashed with militants advancing on the city of Baquba, just 50 kilometres north of Baghdad, on Friday, as an offensive spearheaded by fighters drew closer to the capital.

Security forces were battling militants on the outskirts of Muqdadiyah, 35 kilometres northeast of Baquba, police and army officers said.

Baquba is the capital of Diyala province, whose mixed Arab, Kurdish, Sunni and Shia population has made it a byword for violence ever since the US-led inavasion of 2003.

The militants have already captured two provincial capitals this week – Tikrit in Salaheddin province and second city Mosul in Nineveh.

President Barack Obama said Washington was examining “all the options” to help Iraq’s beleaguered security forces resist the offensive, spearheaded by the Islamic State of Iraq and the Levant (ISIL), which began in Mosul late on Monday.

Washington has found rare common cause with its longtime foe Tehran, with both voicing dismay at the extremists’ advance and pledging to boost aid to the government.

ISIL spokesman Abu Mohammed al-Adnani vowed its fighters would press on to the capital and, further south, to Karbala, visited by millions of pilgrims from around the world each year.

US transfers 12 detainees including 10 Pakistanis out of Afghan prison