Did you know?: Na Maloom Afraad to reveal identities post-Ramazan

Did you know?: Na Maloom Afraad to reveal identities post-Ramazan 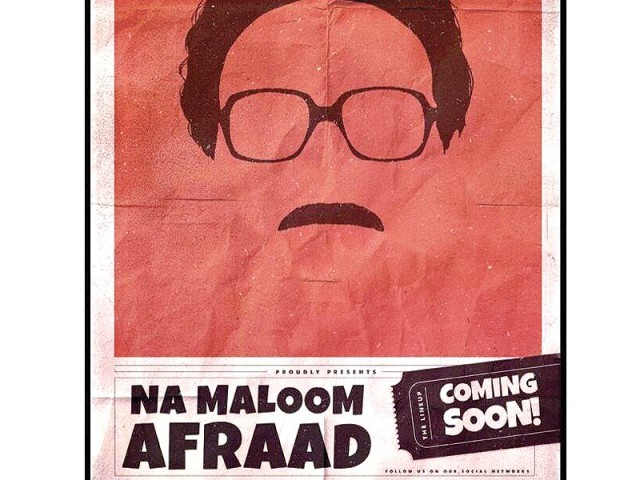 We have some ‘maloomat’ for you. Pakistani film Na Maloom Afraad will be released in the country in August 2014. A social comedy thriller, the film revolves around three protagonists and life’s paradoxes.

The cast includes film and television veterans Javed Sheikh and Salman Shahid along with actors Fahad Mustafa, Mohsin Abbass Haider, Urwa Hocaine and British actor Kubra Khan. According to a press release, the film features television sensation Mehwish Hayat in a dance number. Na Maloom Afraad has been directed and by Nabeel Qureshi and produced by Fizza Ali Meerza under the banner of Filmwala Pictures, who have also co-written its script.

“The storyline is close to the lives of people living in Pakistan, particularly Karachi and the film has mostly been shot in the old areas of the city,” said Qureshi. “The backbone of this film is the original script and content. The intervening plots and overlapping situations will gratify the audience in an amusing and humorous way,” he added.

Na Maloom Afraad is presently in its post-production phase and its trailers will soon grace television screens. The film claims to break new ground in the emergent Pakistani film industry. Both Qureshi and Meerza feel that there is untapped potential in the industry, which needs to be explored and brought to the forefront.

We hope that the film turns out to be a milestone in the budding Pakistani film industry.