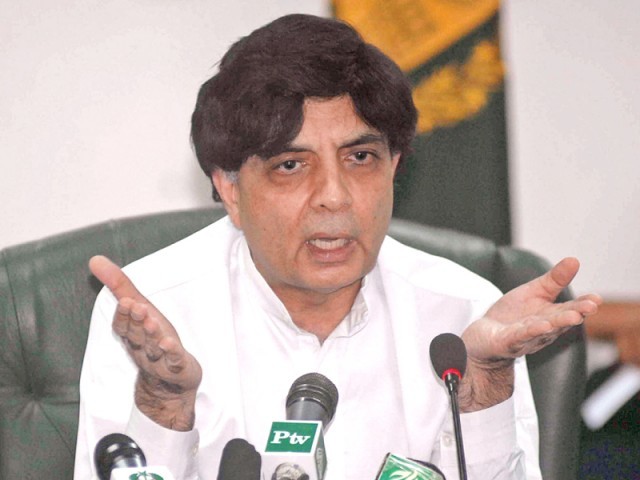 A day after the ferocious attack on Karachi’s airport, Interior Minister Chaudhry Nisar revealed that the ‘old terminal’ was the main target of the terrorists, who wanted to destroy planes and other installations in the vicinity.

Addressing a press conference after presiding over a security briefing at the airport on Monday, Nisar praised security officials, including Airport Security Force (ASF) personnel, armed forces, Ranger and police for battling the assailants and foiling their plot.

“It seems they had planned a major attack. But all installations are safe except for two or three planes, which are partially damaged,” the country’s security czar added.

The interior minister revealed that ten foreign terrorists, who were equipped with grenades, rocket launchers and assault weapons, barged into the airport premises, waging a 5-hour long audacious firefight against security forces.

Nisar said three suicide bombers denoted themselves when security forces cordoned them off.”  A total of 19 people including 11 ASF personnel were killed and 29 were wounded in the attack, he added.

Responding to a question, Nisar hinted that “the terrorists were not of Pakistani origin. We believe that foreign weaponry was used, but further investigation would ascertain details,” he said.

“It looks like the airport was targeted after extensive planning, we cannot disclose details at this moment, till we probe the matter” the interior minister cautioned.

Speaking about the people stranded in the cold storage, the minister added that all resources are being used to pluck them to safely.

In a veiled warning to militants, Nisar said that the government was sincere in restoring peace in the county, but after this cowardly attack, we will respond in the same manner.

On the other hand, Sindh Chief Minister Syed Qaim Ali Shah expressed dismay over the interior minister’s response after the terrorist attack.

He said that Chaudhry Nisar neither contacted him nor was he invited to attend the law and order briefing at the airport.

“I am the chief minister of this province, but he (Nisar) did not inform me about the meeting.

This is very unfortunate,” he told a press conference at CM house.

The chief minister dispelled the notion that an intelligence agency had intimated the provincial government about a possible attack on the airport.