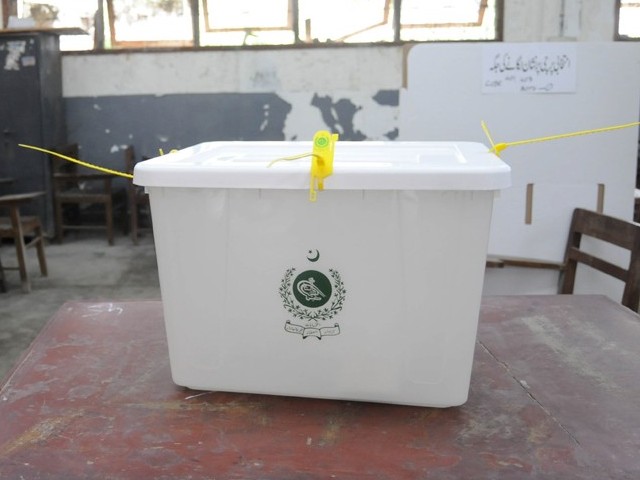 The National Database Registration Authority (NADRA) has found rigged votes in the record of ballot papers from NA-118, Lahore, The Express Tribune has learnt.

According to a report submitted by the authority to the election tribunal, the record of only 68 of 251 polling stations in the constituency were provided to NADRA. The total number of votes here was 46,118 and only 15,835 voters’ thumbprints were verified.

NADRA’s report added that 4,043 votes were found to be cast against invalid CNIC numbers, and NADRA states that identity cards with these numbers were never issued by the authority.

According to NADRA’s report, 142 votes were found to be cast by those who were not registered voters in this constituency. Another 146 votes were found to be submitted by those casting votes multiple times. 272 counterfoils were found without fingerprints and 44 votes were reportedly polled by non-registered voters. The report concluded that the fingerprints of 25,636 counterfoils could not be verified as the correct ink was not used. The report bore the signatures of NADRA Director General Syed Muzaffar Ali.

On December 19, 2013, the election tribunal ordered NADRA to examine election material at polling stations in NA-118, Lahore. However, a bench of the LHC granted a stay against this verification. On March 13, the stay order was vacated and the recounting commenced.

The report stated only 69 polling bags from 68 polling stations were carrying relevant election material whereas the remaining 256 polling bags contained irrelevant material, including used or unused ballot papers, ink pads, and material relating to the provincial constituency or incomplete material. The tribunal has ordered NADRA to continue the verification of available material.

NADRA’s report adds that the ink used during polling does not meet the criteria proposed by the authority – it did not dry fast or ensure that it did not smudge due to overlapping papers. This has resulted in 25,636 ‘bad quality’ votes which could not be processed by the Automated Fingerprint Identification System (AFIS) as they were indecipherable.

Appearing before the court on Monday, counsel for Malik Riaz requested the report be sealed and the media not provided access to it. Advocate Tipu Salman Makhdoom, counsel for Hamid Zaman, submitted the report is not a classified document and the tribunal provided him with a copy. Makhdoom told The Express Tribune the report makes it clear the election was ‘rigged’. He said the tribunal would be requested to order the election commission to hold an inquiry into the missing electoral record. DG NADRA and the local commission have been summoned on June 16.

It is pertinent to mention that Press Information Department on Sunday issued a statement by the NADRA spokesperson, saying, “As the case is still subjudice, all stakeholders, including media and political parties, are requested not to draw any conclusions… Let the tribunal make the final judgment.” The statement stressed that the tribunal and report includes ‘just findings and not a conclusion. Only a court order will be regarded as a conclusion.”

Pakistan Tehreek-e-Insaf will submit a petition in the Supreme Court on Wednesday seeking a suo motu notice against the acting chairman of NADRA for his alleged involvement in NA 118.

The decision was made during the PTI Core Committee’s meeting on Monday.  Dr Shireen Mazari, the party’s information secretary, said the committee had expressed serious concern over the vote tampering.