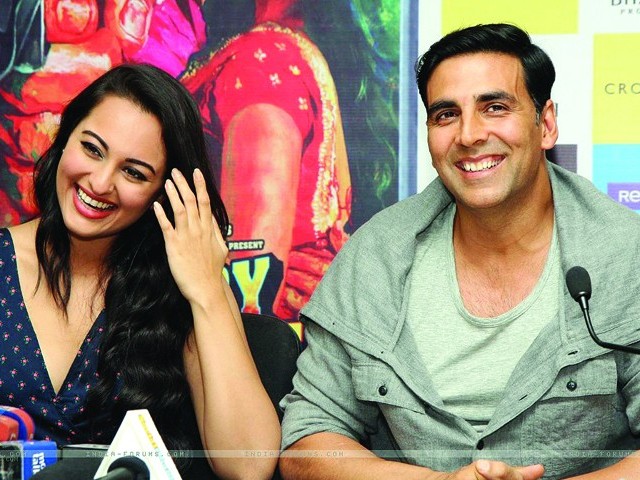 The actors admire each other’s professionalism at work and are always all praises for one another. PHOTO: FILE

After three films together, actors Akshay Kumar and Sonakshi Sinha are back together in Holiday —A Soldier Is Never Off Duty. The duo, who has always shared impeccable onscreen chemistry and have done great at the box office, also share a great relationship off-screen.

“Sonakshi is extremely professional. I know many heroines who reach the set at 7 am, but don’t step out of their vanity vans before 11am. They seem to take the word ‘vanity’ rather seriously. Sonakshi, on the other hand, values the producer’s money,” said Akshay about his costar, reported the Times of India.

Sonakshi holds Akshay in high regard and admires his professionalism. “He never misuses his stardom and values other people’s time,” she said. The two actors understand each other’s work ethics and tend to work their way around it.

According to Akshay his Rowdy Rathore co-star is a spontaneous actor. “She switches from a frivolous mood on the set to a serious scene in front of the camera with ease. I have to prepare a lot before I get into the character,” he said.

Ever since Sonakshi debuted in Dabangg, she had to deal with a lot of criticism on being overweight and eventually after following an intense weight loss regimen, the actor shed quite a few pounds. Akshay, however, likes Sonakshi with the few extra pounds. “I am a Hindustani man. I don’t like heroines with a size zero figure. I prefer Sonakshi the way she is,” said the actor, who is always ready with fitness tips.

Since the mood on the set of this film, presented by Reliance Entertainment and produced by Vipul Shah, was sombre due to its serious subject, the actors didn’t get to spend their free time doing fun things, like they usually do. “No masti was allowed on the set,” they said collectively.