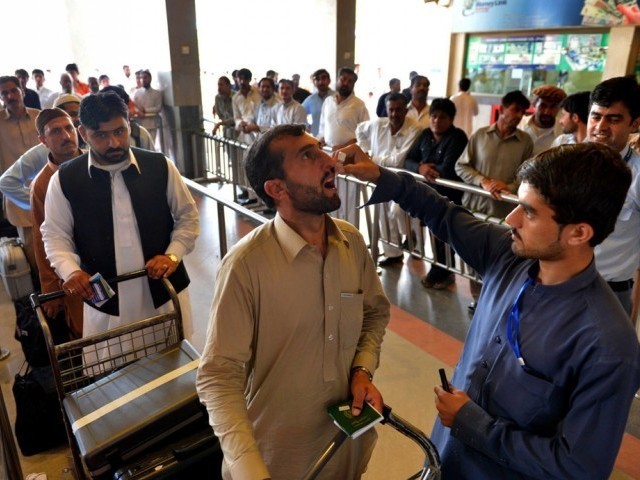 A passenger being administered polio drops at airport. PHOTO: AFP

The federal government will begin enforcing the International Health Regulations recommended by the World Health Organisation (WHO) for all outbound travellers from Pakistan from today (June 1), requiring them to carry a polio vaccination certificates.

The WHO, on May 5, had imposed travel restrictions on Pakistan over its failure to control the spread of poliovirus. However, the federal government expressed its displeasure over this decision and informed the global health body that it was not prepared for it. Hence, the government had asked for time till June 1 for the effective implementation of the IHR recommendation.

Talking to The Express Tribune, an official from the Ministry of National Health Services, Regulation and Coordination (NHSRC), on the condition of anonymity, said few meetings were held at the ministry on Saturday to gear up efforts for the effective implementation of the IHR reconditions.

An advisory has been prepared to be send to all the provinces and public health departments regarding the mandatory vaccination of people.

Sharing a few points from the advisory, the official said it says that the provincial government should ensure that each person, irrespective of its age, caste and creed planning to travel abroad, should be vaccinated against polio. They should be issued certificates free of charge.

All the major public hospitals and international airports should have their polio counters open and functioning for 24 hours.

All these public hospitals should provide a proper sitting or waiting areas for travellers coming for vaccination, the official added.

The polio certificate issued to any one will be valid for one year.

A person who has planned his foreign trip earlier can get vaccinated four weeks before the date of departure or in case of an emergency, can get it done at the airport.

Regarding polio vaccines, the official said that for the time being, they procured them on loan from the Expanded Programme on Immunisation (EPI), which will later be replaced by the vaccines coming from donor agencies or the countries which have pledged to provide them. Among others, Saudi Arabia has pledged to procure 10 million polio vaccines for Pakistan for this cause, said the official.

A high-level meeting of donor agencies is scheduled for Monday to discuss how they can support Pakistan for the effective implementation of IHR recommendations, he added.

Around 15,000 doses of polio vaccines have been provided to the Benazir Bhutto International Airport Islamabad and the counter will be activated 24/7 from Saturday midnight.