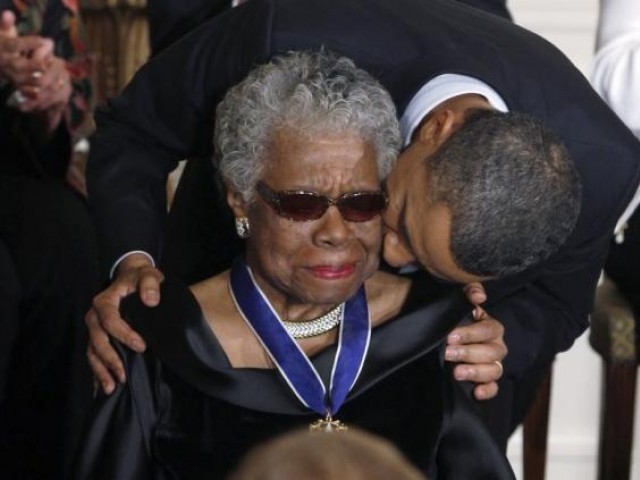 File phot of Maya Angelou receiving a Medal of Freedom from US President Barack Obama at the White House in Washington, February 15, 2011. PHOTO: REUTERS

WINSTON-SALEM: US author and poet Maya Angelou has died at age 86 in North Carolina, local media reported on Wednesday, citing her agent and a local official.

Angelou provided eloquent commentary on race, gender and living life to its fullest in poems and memoirs such as I Know Why the Caged Bird Sings, which brought her wide acclaim.

She wrote more than 30 books and was a Grammy winner for three spoken-word albums. She had a home in Winston-Salem, North Carolina, where she was a professor of American studies at Wake Forest University.

She was honored at the National Book Awards ceremony last year for her service to the literary community.

Listen to yourself and in that quietude you might hear the voice of God.

People from around the world react to her death.

We're saddened by the passing of our friend Maya Angelou. Thank you for all you've done, and for all the hugs. pic.twitter.com/kmLCN59Uef

"If you are always trying to be normal, you will never know how amazing you can be." Maya Angelou – who was utterly amazing.

#RIP Maya Angelou, who reminded us "Nothing can dim the light which shines from within"

RIP Maya Angelou. Saddened by this great loss. We were fortunate to host a visit by the legendary poet in 2009. pic.twitter.com/yq5K8mi1CK

RIP! Maya Angelou. U will be missed but your verses will stay with us and continue to inspire many many generations to come.

You've probably read and shared #MayaAngelou every single day and didn't know it. Some of the most socially shared quotes of all time.