Alex and Lisa have been on the road since 2011, having ceremo­nies in 52 countr­ies so far.
By Our Correspondent / Photo: Ayesha Mir
Published: May 28, 2014
Tweet Email 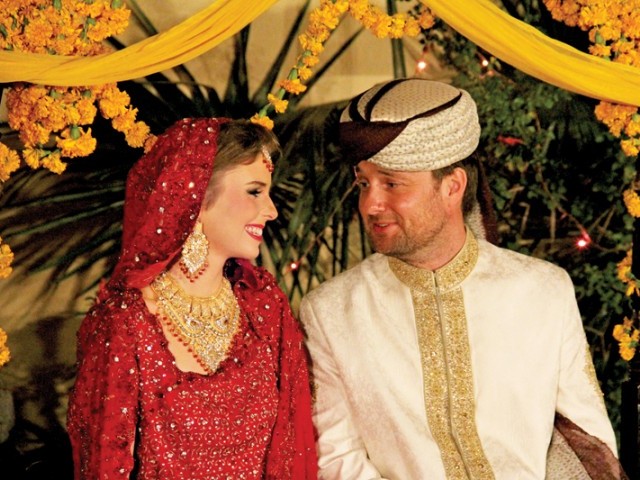 Alex and Lisa, a UK-based couple, celebrated their 66th wedding ceremony at a house in Karachi on Monday evening. With marigolds, roses and mithai, the couple enjoyed a thoroughly traditional ceremony. PHOTOS: AYESHA MIR/EXPRESS

If this adventurous couple from the UK wanted a Pakistani wedding, they surely got one — complete with late arrivals, rickshaws, dhol walas and, of course, gunshots.

Alex and Lisa were in Karachi this weekend to have their 66th wedding ceremony. The idea to have a wedding in Pakistan’s port city came about purely by chance. The couple entered the country on their way to India, after having a ceremony in Iran. As they were driving their trusted camper van, Peggy, through Nushki district in Balochistan, its axle broke and they were stranded.

The couple had to stay in Quetta for nearly a week to wait for the car parts to arrive from the United States. They decided it was a great opportunity to give a shout out to Karachi and have a traditional Pakistani wedding.

On Monday evening, the lawns of a house on Khayaban-e-Muhafiz in DHA were decorated with roses and marigolds, and a traditional swing for the happy couple. After spending nearly five hours at a beauty salon, a flustered Lisa arrived at the venue. “I feel like a shadow of my former self,” she said. Even Alex admitted he hardly recognised her when she came.

As the couple posed for the photo shoot, they recalled the adventures they’ve been on so far. “I remember the James Bond wedding most vividly,” said Lisa, referring to a Hollywood-style wedding they had in the US. “I think the Zulu wedding in South Africa was my most memorable one so far,” said Alex. After they started their wedding adventure in Canada in 2011, the couple made its way through 52 countries and 66 wedding ceremonies towards their final destination, Australia, and all this, to find the perfect wedding spot. “We wanted to experience each culture before we wrote about their wedding traditions,” said Lisa. Once in Australia, the couple will choose their favourite spot, fly back to it with their family, and the friends they are making along the way, and have their first legal marriage, added Alex.

Before their adventure started, Alex and Lisa had a grand garage sale in which they sold pretty much everything they owned and collected enough money to get the journey started. “We initially planned to be on the road for around two years,” said Lisa. “But, we will be finishing our third year very soon now.”

It is the couple’s unique idea that has made people help out and become a part of their story. “We wanted the happy couple to experience Pakistan before they head over to India,” explained Marium Abbas, the head of iPlan. Her team at iPlan arranged everything from the couple’s stay at Beach Luxury hotel, visit to Port Grand, dinner at Kolachi and their Pakistani wedding. “We sent out an email to all designers, makeup artists and photographers to become a part of this event,” said Abbas. “We were lucky that Portia lent us the clothes, Tanzeela’s agreed to do Lisa’s makeup and OShoot offered to photograph.”

Mutahir Mahmood of OShoot Photography admitted he found the couple’s story hard to believe. It was a few Google searches later that he learned about them and decided to get on board. “They have a great story and if I can help be a part of that story then that’s great,” he said. Like any other Karachi wedding, the few guests who came arrived long after 10pm. Alex made a grand entrance in a rickshaw, with one enthusiastic security guard dancing his heart out in front of the procession. Lisa followed a few minutes later, walking slowly under a red dupatta. Disappointed that there was no dancing in the bride’s procession, the enthusiastic guard gleefully fired two shots in the air. Once the two had settled down, the guests performed the mehndi rituals, which were followed by a dance performance by 17-year-old Ibbad Ali Shah, a teacher at ActOne dancing studio. “This is very exciting, the local music is full of energy,” exclaimed Alex as loud music played from the speakers. The festivities lasted well after midnight. The happy couple flew back to Quetta on Tuesday morning, from where they will be driving Peggy down to Multan and then up towards Lahore and Islamabad. You can follow the couple on their journey on 2people1life.com