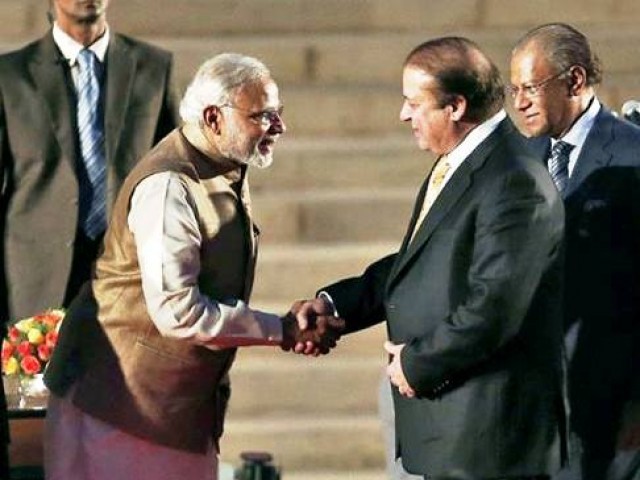 India's Prime Minister Narendra Modi (C) is greeted by his Pakistani counterpart Nawaz Sharif (3rd R) after Modi took the oath of office at the presidential palace in New Delhi May 26, 2014. PHOTO: REUTERS

Prime Minister Nawaz Sharif has apparently gone to New Delhi to attend the swearing-in ceremony of India’s new Prime Minister Narendra Modi but his visit has generated optimism of a ‘new beginning’ in a relationship marred by decades of hostilities between the two neighbours.

The immediate Pakistani expectation is that Nawaz-Modi meeting today (Tuesday) will eventually pave the way for the resumption of stalled peace process between the two nuclear-armed countries.

Known as a composite dialogue, the process has made little progress over the past few years due to New Delhi’s approach linking the peace talks with Islamabad successfully prosecuting suspects of the November 2008 Mumbai attacks.

Just hours before the crucial meeting, Indian experts have warned the newly-elected prime minister against letting off the hook the issue of so-called cross border terrorism.

But despite such assertions by certain Indian media outlets, a foreign ministry official told The Express Tribune that given the composition of prime minister’s delegation, the Nawaz-Modi rendezvous is much more than just a courtesy call.

Prime Minister Nawaz will be assisted by his advisers on national security and foreign affairs Sartaj Aziz, Tariq Fatemi and foreign secretary Aizaz Ahmed Chaudhry while the Indian prime minister will be accompanied by India’s new Foreign Minister Sushma Swaraj during the much-talked about meeting.

The official said Modi’s unprecedented invitation to leaders from the South Asian countries including Prime Minister Nawaz Sharif was a clear indication that ‘Modi means business.’

A senior member of ruling Pakistan Muslim League-Nawaz (PML-N) feels that Modi will try to ‘clean his past’ by reaching out to Pakistan.

The new Indian prime minister is widely known in Pakistan as a man who has been accused of orchestrating the 2002 anti-Muslim riots in his Gujarat state.

“He wants to dispel the impression that he is anti-Muslim and that is why he invited our prime minister,” said the PML-N leader while requesting anonymity.

India officials familiar with the foreign policy vision of Modi’s government believe that his administration will work on strengthening regional grouping such as South Asian Association for Regional Cooperation (Saarc).

People close to Modi are of the view that his government will focus more on improving ties with regional countries instead of looking to the West. They even think that Modi feels that countries such as India, China and Pakistan could form a strong economic bloc.

But some analysts and diplomats attempted to downplay the hype and suggested that Pakistan should have ‘minimum expectations’ from the new government at this stage.

“The mature approach is that we should not have high expectations,” commented former foreign secretary Riaz Khokhar.

Khokhar, who had been part of intense negotiations with Indian interlocutors during the latter part of Musharraf regime, does not expect any ‘substantive discussions’ when Nawaz meets Modi in a historic meeting being closely watched not only in the two countries but also across the globe.

The Bharatiya Janata Party’s (BJP) move to invite Prime Minister Nawaz at Modi’s oath-taking has come as a surprise for many considering the party’s strong rhetoric against Pakistan during the election campaign.

But Khokhar believes that pre-election statements of the BJP leadership should not be taken seriously. The foreign office also expressed the hope that the BJP would leave behind the pre-election rhetoric.

“We hope that when the new government takes over, the kind of atmosphere that prevailed during the election rallies will be left behind and we will get down to the business of statecraft,” said Tasnim.

Experts are also of the view that given his economic agenda and strong backing of India’s corporate sector, it is expected that Modi would want to have stable relations with Pakistan.

“The Indian corporate sector does not want war and this will really compel Modi to have good ties with Pakistan,” said analyst Hassan Askari Rizvi.