PM orders release of 151 Indian fishermen ahead of Modi inauguration

PM orders release of 151 Indian fishermen ahead of Modi inauguration

Around 57 fishin­g boats seized by Pakist­ani author­ities will also be releas­ed for the first time in many years
By AFP
Published: May 25, 2014
Tweet Email 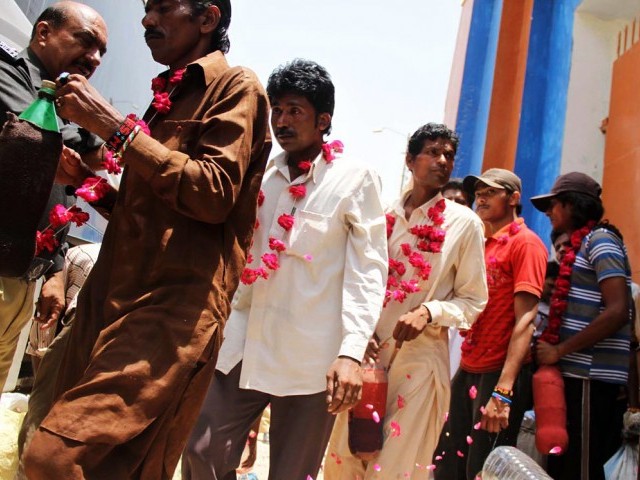 Indian fishermen are presented with garlands as they leave Nara Jail after their release by Pakistani authorities. PHOTO: ONLINE

ISLAMABAD: Prime Minister Nawaz Sharif ordered on Sunday the release of 151 Indian prisoners ahead of his historic visit to New Delhi to attend Narendra Modi’s swearing-in as premier.

Islamabad’s move to free the prisoners — mostly fishermen accused of violating Pakistan’s territorial waters — was welcomed by India as a diplomatic gesture ahead of the inauguration Monday.

Modi’s invitation to Sharif to attend the ceremony has been widely seen as a bold diplomatic statement that he intends to improve strained ties between the nuclear-armed rivals.

The PM’s attendance will be a first in the history of the South Asian neighbours, which have fought three wars since independence in 1947 and remain bitterly divided over the disputed region of Kashmir and other issues.

“The prime minister has instructed that 151 Indian prisoners currently detained in Pakistani jails and 57 Indian fishing boats in Pakistani custody should be released on Monday,” a senior government official told AFP.

“Pakistan has always held that the issue of prisoners in our respective countries is a humanitarian one and should be taken in that spirit,” the official said.

India’s foreign ministry said Pakistan had notified New Delhi of its intention to free the prisoners as a “goodwill gesture” to coincide with the swearing-in.

“It’s always good to welcome back our prisoners who have been in custody for some time,” foreign ministry spokesman Syed Akbaruddin told CNN-IBN television network.

Sri Lanka President Mahinda Rajapakse ordered the release before his visit to Delhi for the ceremony, his office said in Colombo.

Modi invited PM Nawaz Sharif and other neighbouring heads of government from the South Asian Association for Regional Cooperation to Monday’s swearing-in.

South Asian authorities frequently arrest fishermen from neighbouring countries for straying into their waters. The absence of properly defined maritime borders and of technology to determine ships’ location adds to the problem.

Efforts by various fishing communities to resolve the problem have ended in failure. The fishermen often languish in jails even after serving their terms because fulfilling official paperwork to get them home can take time.

Modi will be sworn in as prime minister 10 days after his right-wing Hindu nationalist Bharatiya Janata Party won national elections in a landslide, securing the biggest majority by a single party in 30 years.