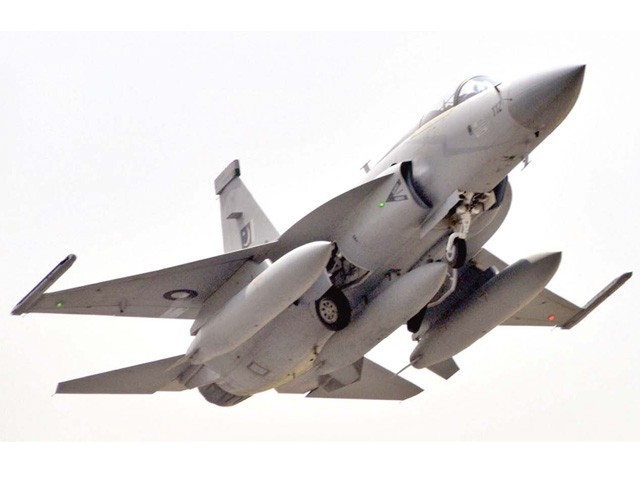 A huge cache of arms and ammunition, including IED-making material, was also destroyed in the air raids. PHOTO: FILE

Pakistani warplanes bombed suspected hideouts of militants in North Waziristan Agency on Wednesday, killing and wounding dozens of militants and prompting a warning from a powerful commander that his group could pull out of a peace agreement signed with the government in 2007.

In pre-dawn strikes, fighter jets and helicopter gunships raided targets in Miramshah, Mir Ali, Datta Khel, Ghulam Khan and Spen Wam tehsils of North Waziristan, according to the Inter-Services Public Relations (ISPR). At least 60 hardcore militants, including some key commanders and foreigners, were killed and around 30 wounded, it claimed. “A huge cache of arms and ammunition, including IED-making material, was also destroyed in the air raids.”

The identity of most of the dead could not be verified independently, but two of the dead commanders were identified as Mosa Khan Mehsud and Sabir Mehsud.

Over the past few weeks, a “large number of civilians and security personnel have embraced shahadat due to various terrorist acts, including IED blasts and suicide attacks in Fata, K-P and Karachi”, the ISPR said. “Intelligence reports and other investigations confirmed links of these terrorist acts with the terrorists targeted today.”

Independent sources put the casualty figure at 70 dead and 50-plus injured – among them women and children. They said that tribesman Sharifullah’s house was also hit in Mosaki village in Mir Ali tehsil, killing two women, three children and four men of the same family. The air raids also triggered a fire in the main market, Mir Ali Bazaar, in which several shops were gutted.

Soon after the air blitz, the local political administration imposed an unannounced curfew in different areas of the agency. All government offices and educational institute were closed, creating problems for local population, particularly students who couldn’t take their scheduled papers.

The government began negotiations with the Tehreek-e-Taliban Pakistan (TTP) through intermediaries in February, with a ceasefire beginning March 1 but breaking down a month later. Analyst Hasan Askari said the strikes were in line with the military’s policy of retaliating to attacks by militants. “There is also realisation among government that the dialogue is more or less dead,” he added.

Powerful Taliban commander Hafiz Gul Bahadur holds sway over parts of North Waziristan. His group had struck a peace deal with the government in 2007. Security officials, however, say that many TTP members had fled to North Waziristan after the military launched a major offensive, codenamed Rah-e-Nijat, in South Waziristan in 2009. Apart from that, several splinter groups, including foreign militants, are also hiding in the region who routinely carry out attacks on security forces.

A spokesman for the Taliban in North Waziristan said his group’s top decision-making council, Shura-e-North Waziristan, will meet soon to review the peace deal with the government. “If the airstrikes continue we will have no other option but to scrap the peace agreement and the government and its security forces will be responsible for the consequences,” the spokesman, Ahmadullah Ahmadi, said in a statement.

Tribal sources told The Express Tribune that the airstrikes have stoked tensions between the TTP and the Hafiz Gul Bahadur Group because the latter blame the former for the sufferings of North Waziristan tribesmen.

SC took up Geo’s petition but not ours: SIC