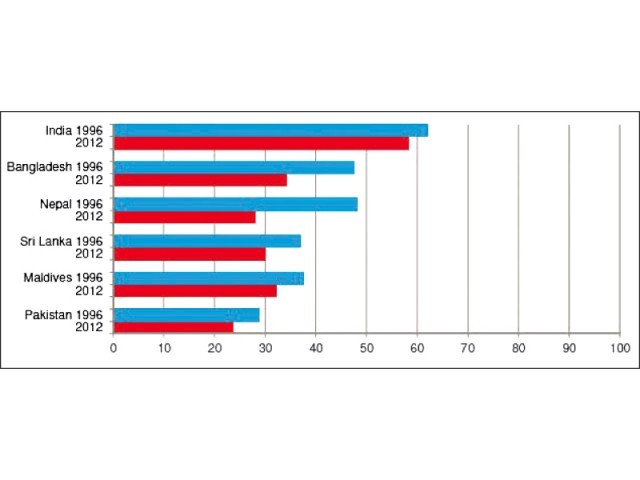 Based on a scale of 0-100, Pakistan was just under 30 in 1996, but by the year 2012, the freedom of expression and participation was at 23. SOURCE: TRANSPARENCY INTERNATIONAL

Transparency International lauded Pakistan’s judiciary as well as the anti-graft body National Accountability Bureau (NAB) for taking some action against corruption. However, it is not enough to develop a system of accountability in the country.

A report released by Transparency International, titled “Fighting Corruption in South Asia: Building Accountability”, states that many agencies need their government’s consent to investigate suspected graft cases, while others face massive political interference during their probes.

“The region is characterised by a vicious cycle in which a highly elitist and unaccountable political culture remains largely unchallenged because the very actors who can bring those in power to task are being systematically silenced,” said Transparency International Asia-Pacific director Srirak Plipat.

The study, released in Nepal’s capital Kathmandu, draws on the findings of research on anti-corruption efforts in Bangladesh, India, Maldives, Nepal, Pakistan and Sri Lanka, analysing almost 70 institutions across the six countries.

It focused on four aspects: the right to information, laws to protect whistleblowers, anti-corruption watchdogs, and building a culture of accountability in South Asia.

Moreover, the report tabulates data to assess to what extent are a country’s citizens able to participate in selecting their government, and to what extent is there freedom of expression, freedom of association, and a free media?

And similar was the case with the six countries of South Asia studied in the report. With technological advancement, it is surprising to witness a decrease in freedom of expression in countries.