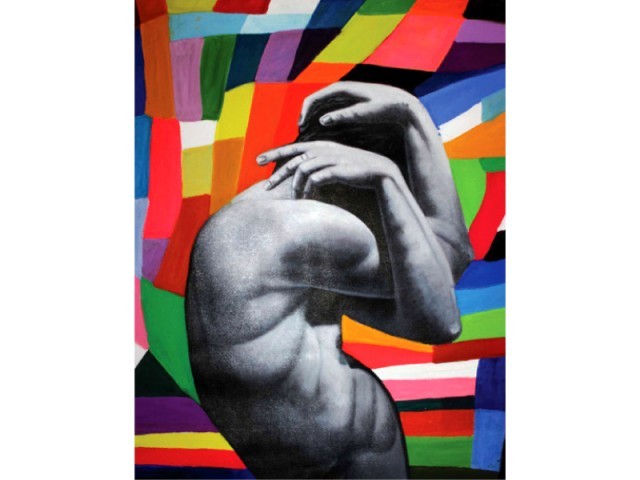 Three art works by Usman Ahmed — Life is not all that Flamboyant, Trapped and Jalsa (rally) — on display. PHOTO: EXPRESS

Integrating diverse social observations in a series of paintings, Usman Ahmed presents pressing issues with a splash of vibrant hues in his first solo exhibition.

“Life is not all that Flamboyant” has been curated by My Art World and comprises of 28 pieces painted over nine months, bringing to light an arrangement of mix media, oil, acrylic and poster paints.

The paintings expose Ahmed’s neon palette creating pieces that allude to fantasies. Drawing inspiration from current issues, his work is a creative take on social themes with a refreshing twist.

By experimenting with diverse techniques he makes intense pop art inspired images. A series reflecting unfathomable human expressions is encapsulated in Ahmed’s work with street children and an image of an old man, who is his gatekeeper.

Ahmed experimenting like a true mix-media artist conveys a sense of rebellion in a series of paintings of black and white horses. With polo serving as the artist’s inspiration, the work is as energetic as the sport itself. A gush of action and movement in the work magnetically captivate attention.

Speaking to The Express Tribune, Ahmed said the artwork reflected his day to day social observations. While speaking about his subjects, he said that it was essential to capture the emotions in their eyes. The polo inspired series speaks for itself, but it is the expression of emotion and energy through movement that is the real attraction behind the glamorous sport.

My Art World Curator Zara Sajid said that the young artist uses his paintings as a tool to express his feelings and inhibitions about lifestyles and behaviours. A combination of realism and pop art is what results in a quintessential piece from this showcase. Realism is what aids him to stay close to reality and pop art is what helps him escape into a “wonderland.”

“Life is not all that Flamboyant” is a young man’s whimsical journey into the social strata that we as individuals consciously build around ourselves, she stated. The series reflects a transition from simplistic pop art influences pieces to the complex. “Life is as we know it. Living in the capital, one sees the various clichés that people live in. The purpose of this show is to give an insight into the hyper-realist pop culture of a society through the artist’s lens.”

Egyptian Ambassador Saaid Hindam said that Ahmed’s work was fresh and powerful.  The expression of action, movement and enormous force that comes out through his work is a contrast tohis otherwise soft personality.

The event was attended by diplomats, politicians, socialites and art enthusiasts.