A list of celebr­ities who have won and lost in the electi­ons, which are expect­ed to alter India’s politi­cal...
By Ayesha Shaikh
Published: May 16, 2014
Tweet Email 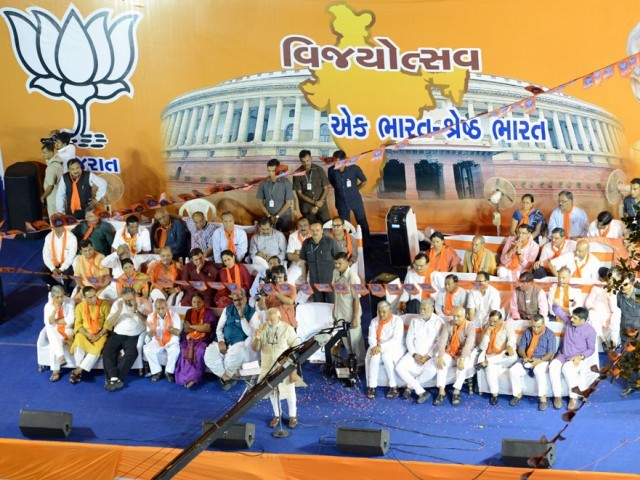 Following the landmark 2014 Indian general elections, results indicate that the 16th Lok Sabha will be no less than star-studded. Although the practice of party tickets being given to celebrities in the country dates back to the 1960s, according to inktochange.com, this year saw considerable participation from Indian film and television bigwigs. Political parties can thank their lucky stars (pun intended) for having them on board.

Whether this is a political gimmick to capitalise on celebrities’ stature or a genuine effort on the stars’ part to make a change remains to be seen. While some of the glitterati have given their fellow contenders a run for their money, others have been unable to prove their mantle in the political realm.

Here are a few celebrities who have won and lost in the elections, which are expected to alter India’s political landscape: Bappi Lahiri: Composer-singer Bappi Lahiri, who is known as the ‘Disco King’, was BJP’s contender from Serampore. Facing tough competition from his fellow contestants, the Hindustan Times reported that he lost. Prakash Jha: Following his defeat from Bihar in the 2009 Indian general elections, filmmaker Prakash Jha had reportedly said that he would not contest again. Contrary to his claim, he contended from Bihar again this year as a Janata Dal (United) candidate for West Champaran, but lost, according to the Times of India. Jha may have made his mark on the reel with political dramas such as Raajneeti (2010) and Satyagraha (2013), but he hasn’t been able to do earn his political spurs in real life. Smriti Irani: Television actor Smriti Irani, BJP’s Amethi contestant was lagging behind Congress’ Rahul Gandhi until the filing of this report. The Kyunki Saas Bhi Kabhi Bahu Thi star’s larger-than-life persona doesn’t seem to have helped her enough in her political career. In what was a close competition, Smriti made a great start, but soon fell short as Rahul took the lead, reported bollywoodlife.com. A tough battle indeed. Hema Malini: According to recent reports, Hema Malini is leading as a BJP candidate from Mathura. The ‘Dream Girl’ of Bollywood has been a BJP loyalist ever since she joined politics in 2004, according to india.com. Known for her stellar performances in films such as Sholay (1975) and Baghban (2003), we’re eager to see how she performs in the evolving political sphere of India. Rakhi Sawant: The actor, who has made waves throughout her career in Bollywood, lost the elections, which she was contesting from her own party Rashtriya Aam Party (RAP). Despite not making it to the Lok Sabha, the actor has become markedly popular on Twitter. According to the New Indian Express, she stood sixth with a mere 1,995 votes. Paresh Rawal: Renowned Bollywood actor Paresh Rawal, who won the elections, was a BJP contender for the seat in Ahmedabad, Gujarat, reported the Times of India. His gripping rhetoric and active participation on social networking websites were complemented by his popularity as an unparalleled comedian. With films such as Hera Pheri under his belt, he is now looking to shine in his alternate career as a politician. Raj Babbar: Indian National Congress candidate Raj Babbar was contesting elections from Ghaziabad, Uttar Pradesh and didn’t win. The veteran actor played politician in Bullett Raja (2013). He has been formerly panned for making a controversial statement regarding how much a meal costs for a common man. He recently created a stir by comparing Narendra Modi to Adolf Hitler, reported the Hindustan Times. Kirron Kher: Contesting elections for Bharatiya Janata Party (BJP) from Chandigarh, Kirron Kher won against actor Gul Panag, reported the Times of India. The veteran actor, who was last seen in film Total Siyapaa (2014), won by a whopping margin. Her elated husband, actor Anupam Kher took to Twitter and posted, “Congratulations @KirronKherBJP for winning the Chandigarh Parliamentary seat by a margin of more than 69,000 votes.”

Lake Bell on going from indie to Disney