New media: ‘If you want to be a journalist, be curious’

New media: ‘If you want to be a journalist, be curious’ 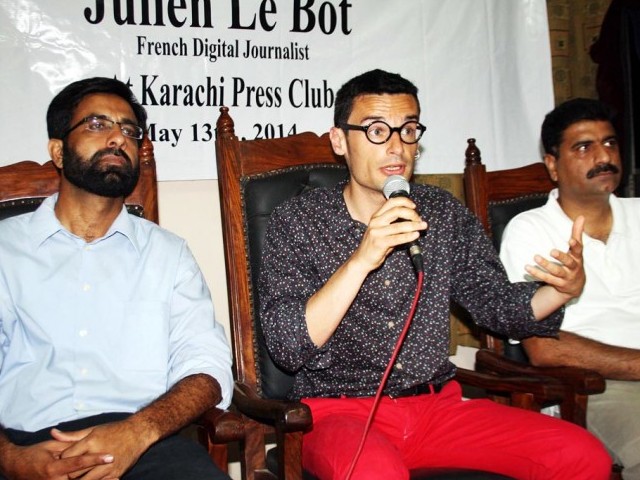 The first step to becoming a journalist, according to French journalist Julien Le Bot, is to be curious.

Le Bot, who primarily works in digital media, believes that philosophers and journalists have similar characteristics. He added that when he was younger, he wanted to be a philosopher but ended up working in journalism.

While talking about the do’s and don’ts of journalism, Le Bot quoted a couplet from French poet, Charles Pierre Baudelaire, to explain the importance of ‘strolling’. He added that journalists don’t just have to be curious but need to be professional strollers as well in order to get the job done.

The French journalist said that just like any other field of work, journalism, also needs to catch up with new practices.

“In France, the most innovative projects are produced outside the newsrooms,” he said while talking to The Express Tribune. “After holding workshops in Karachi, I have come to realise that the people here have a lot of potential to explore the emerging and challenging avenues of journalism.” He added that along with new practices, the method of story-telling also has to change – take up issues and make them more exciting.

The 33-year-old journalist said that long form journalism was important. “If you have a story, you engage web developers and use tools to make it interactive and work on it just like any other project,” he said. “The pressure in a newsroom is such that it reaches the point of redundancy. This demotivates journalists from their goals and thus to keep the job moving forward, new modes need to adopted.”

While talking about his own career, Le Bot said that he started working for France24, when he was just 23-years-old and then started a media boot camp called 4M Mashriq, for new media startups in Lebanon, Syria, Iraq and Palestine.

His trip to Pakistan made him realise that he can take the camp a step further and bring in more training sessions for young journalists who want to explore new avenues of journalism.

“I left routine journalism because I wanted to be free to do what I wanted to work on,” he said. “I did not want to depend on the agenda of newsrooms.” Le Bot added that social media and online newspapers have more readership than broadcast or print. “In France, it’s only the older lot that watches television,” he said. “The young people are only interested in social media, Twitter, for them is like a newspaper.” He added that it was just a matter of time that the same trends would be followed in Pakistan.

His company, Yakwala, which is a phonetically arranged word for ‘what happens is now’ provides services to new media startups, civil society organisations and NGOs for making their projects more relevant and digital.