The barren dunes: Govt buries head in the sand as the white desert continues to be ignored

The barren dunes: Govt buries head in the sand as the white desert continues to be ignored

The area has no health­care, infras­tructu­re or school.
By Hafeez Tunio / Photo: Ayesha Mir
Published: May 13, 2014
Tweet Email 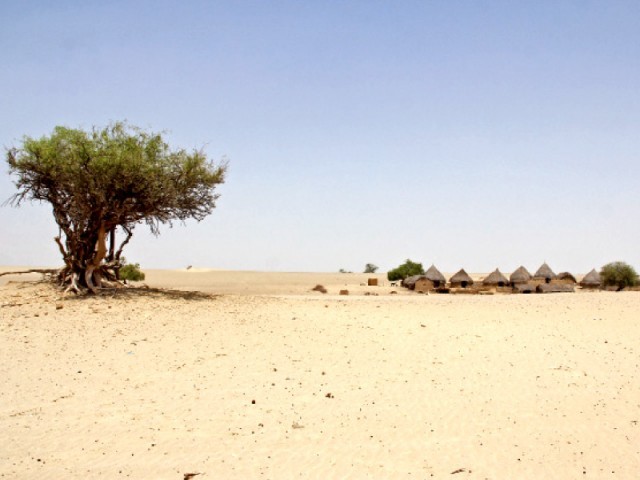 There is little in the desert of Acchro Thar except for white sand and small huts. PHOTO: AYESHA MIR/EXPRESS

Just a few dunes separate India and Pakistan at the border that links Rajasthan and Sindh in the Acchro Thar [white desert] of Sanghar.

The people living there point their fingers towards the horizon, gesturing towards India, and say that their relatives live there. It may be just a few dunes and a border that separate the place where they stand and the place they point towards, but they are worlds apart.

The Indian city of Jaisalmer lies on the other side, nicknamed The Golden City. Here in the white desert, the facilities are not as abundant. No roads, no electricity, no water, no infrastructure, no schools, no water, no healthcare; nothing but the sand and the scorching heat.

“Jaisalmer is only 60 kilometres away, while Sanghar is 130km,” said Sheer Singh, the only graduate of Rab Laho. “We are totally cut off from the cities. A desert jeep takes five hours to reach us from Sanghar and can charge up to Rs8,000. A single road from our village to Sanghar can make all the difference in the world during emergencies.”

There are 145 villages in the white desert, and for a total population of about 100,000, there is only one health centre and a single male doctor in all of Khipro. According to a survey conducted by the Sindh Agriculture and Forestry Workers Coordinating Organisation (SAFWCO), the literacy rate is less than 10 per cent, as most of the villages have no schools.

Wearing a number of amulets around his neck, 10-year-old Waheed Rajar, like most boys of his age in the area, has no ambition other than growing up to become a herdsman; his family’s profession. Rajar has no role model other than his father and other family members that have spend their entire life looking after the animals; one of the major sources of livelihood.

Rajar has never travelled in a vehicle before but wants his father to buy a television. “I have seen a TV in Khipro twice at our relatives’ house,” he boasts. “I am trying to convince my father to purchase one but he says that there is no point as our village does not have electricity.”

However, despite all the problems, its people refuse to migrate from the area. “”Our forefathers spent their lives here and we will be buried in this sand alongside them,” says resident Haadi Raja. “We would rather die than leave the desert behind.”

The people here cast their votes on the guidance of their spiritual leaders and need no more convincing than the words of their ‘murshid’. “The people have to follow the order of the Khalifa,” said an elder of the Kamil Hingoro village, Gul Muhammad Hingoro. “Our lives and our votes belong to the pir and he can do whatever he pleases with them.”

The community in the white desert is very tightly knit and most of the people know the exact population of man and animal in the villages. “There are 80 children in our village but none of them go to school,” said villager Hakeemullah Hingoro. “Most of them take care of the animals as the only school in the area is non-functional.”

According to SAFWCO chief Suleman G Abro, the entire desert is ignored by the government and by civil society organisations. The cries of these people go unheard. “We are producing herdsmen instead of engineers and doctors,” he said, adding that every MNA and MPA gets millions of rupees as development funds but not a single penny has been spent in this less privileged area.

However, despite Abro’s remarks, the people of the desert are intelligent and have engineered their own tools. The people use mobile phone even in the absence of electricity, using mini solar devices to charge their mobiles, which only work when you climb on top of a dune.

The animals are dying

The desert is barren throughout the year and crops cannot grow even when it rains, but it hasn’t for the past 18 months. Even the scattered grass that grows during the rainy reason is running out and the animals are starving. The people don’t want to be provided healthcare or education. All they want is food for the animals and water for themselves; survival is their only goal.

The animals are dying at a fast rate and their price has plummeted as a result. “I had 20 cows but I have lost half of them in the past eight months, said villager Salman Rajar. “I want to sell the rest of them but no one is willing to buy them. Their price has gone from Rs40,000 to Rs4,000. Goats and sheep are being sold for under Rs1,000.”

No plans: City unprepared for this year’s rains