PBCW day one: Traditional is the way to go

PBCW day one: Traditional is the way to go 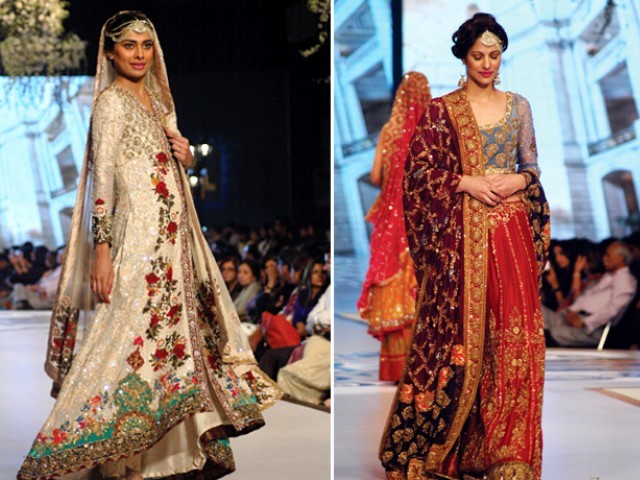 KARACHI: Pantene Bridal Couture Week (PBCW) 2014 is moving into high gear as day one of the three-day event took place on Friday, May 9.

With seven designers and design houses showcasing their spin on the ‘yays’ of bridal wear this summer, some of the showcases were real treats both in terms of aesthetics and workability, while others failed to impress.

But one thing that the collections were a reminder of was that no matter how experimental one gets with bridal designs, nothing tops keeping it traditional. The ‘Bidai’ collection by Zahid Khan failed to impress. With overbearing colour combinations, typical kiran lace and gotta work, the clothes were gaudy. The clothes seemed impractical for a modern-day, city dweller. Although the collection promised to maintain its focus on cuts, they certainly didn’t stand out. Zahid experimented with geometrical designs and huge floral prints, amid which the gotta work lost its appeal. The use of hues of orange, green, purple and maroon was unflattering. Despite the fact that the collection comprised vintage banarsi, karchobs and other traditional wear, it seemed more pertinent for a fashion week than a bridal one. While we love brides in ghararas and lehengas, we’re not fans of men sporting them. With velvet sherwanis impractical for the heat, clumsy cuts and mediocre embellishments, Mansoor’s menswear was mainly a dud. As for women’s ensembles, the chiffon shirts and crinkled lehengas weren’t impressive either. Work on the nude coloured sari and green velvet blouse lacked intricacy. All in all, the collection was lacklustre and too flashy for a wedding in the sweltering summer.

For her ‘Shehnai’ collection, Chottani stayed in line with her signature style that comprises intricate embroidery work and embellishments. She made use of goldwork embroidery threads and wires. From the neckline to the hemline, the ensembles were detail oriented. Starting from engagement outfits to valima clothes, the collection made an interesting transition, both in terms of work and colours. It transformed from lighter work and subtle shades of white and peach to heavier work with striking hues of yellow, purple and orange. Her mehndi jora was particularly striking and the groom’s kurtas were of fun colours such as purple, pink and mustard. Zainab’s line suggested that the summer bride shouldn’t restrict herself in terms of colours and we agree. His men’s collection titled ‘Mann kunto Maula’ took us centuries back. Written by Amir Khusrow in Brij Bhasha, this mesmerising qawwali was the inspiration behind his line. The showcase was a refreshing change from Amir’s previous collections, which have been dominated by monochrome sherwanis. With hues of green, red, khaki and coral, among others, the colour palette was pleasing to the eye. It comprised signature Amir Adnan kurtas, pyjamas, short jackets, sherwanis, shalwars and vests. Screen-printed kurtas with waist coats had tilla work and metallic gold wire work; a distinct feature of these was the delicate Arabic inscriptions in gold. For the man of today, it will be a perfect addition to the closet. Nomi is known for weaving magic with vibrant colours and his ‘Ishq’ collection was once again testament to that. His electric red and gold apparel was impressive. Doing justice to the dichotomy of the old and contemporary, Nomi’s line was rightly chosen to be the day’s final showcase. With his ghararas and lehenga cholis, he revived the traditional use of red for brides, adding his own quirky touch to them. His collection for both men and women is wearable and a great choice for a big fat traditional wedding. The ‘Camellia Progressive’ collection constituted a series of vibrant hues, embroidery and embellishments. The line is essentially made for the woman of today, but who is in touch with her traditions. With a wide-ranging fabric and colour palette that incorporated silk, net, brocade, organza along with garnets and hues of mint green, purple and Wedgewood blue, the collection was too westernised for a traditional, eastern bride. The ‘Masakali’ collection by Sana constituted delicate designs, suitable for a modern-day bride who wants to epitomise elegance on her big day. Comprising flattering silhouettes, the collection was an amalgam of traditional crafts including mukesh, zardozi and resham, and trendy embroidery. With a high wearability quotient, most of the pieces were well made. The colour palette had subtle hues such as mint green and tea pink, which epitomised femininity. The line was inclusive of a funky jump suit that a bride could possibly wear to her dholki. Experiment gone right, we’d say.

Watch a slideshow of pictures from Day One here.