May 11 protest will take place despite govt hindrances: Imran Khan

May 11 protest will take place despite govt hindrances: Imran Khan

Khan allege­d that the PML-N is lying about not causin­g hindra­nces in transp­ort.
By Web Desk
Published: May 10, 2014
Tweet Email 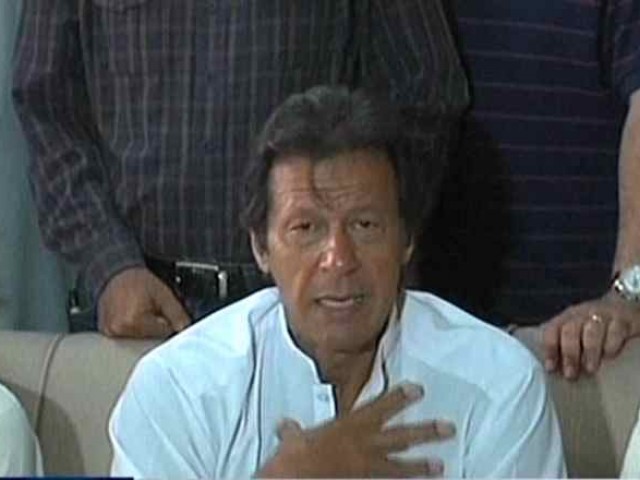 ISLAMABAD: Addressing the prime minister and his government on Saturday, Pakistan Tehreek-e-Insaf (PTI) Chief Imran Khan said that no matter what hindrances the government have put on the May 11 protest, PTI workers and supporters would attend it.

“When the Pakistan Muslim Leagure-Nawaz (PML-N) government is in power, they are more fascist than a military dictatorship,” Khan said.

“They [PML-N] only remember democracy when they are in the opposition,” he added.

Khan alleged that the PML-N is lying about not causing hindrances in transport.

“I’m telling you, the media, go and ask the transporters what they are doing,” the PTI chief said.

The Islamabad city administration has reportedly placed containers to cordon off the Red Zone of the city ahead of Sunday’s rally at Express Chowk. All four entry points of the Red Zone have been sealed.

Mazari, while speaking to Express News, alleged that the Faisalabad administration has closed down all bus stands, preventing people from travelling to Islamabad for the rally.

The decision was taken on Friday night in a meeting between traffic police and transporters, according to Express News. The administration reportedly advised transporters to halt bus services to Islamabad, Lahore and South Punjab and hence all bus stands have been closed since this morning.

Additionally, it was also reported that bus stands have been closed in Gujranwala, Multan and Faisalabad.

Mazari further claimed that she has received reports from Multan, Sargodha, Silakot, Mandi Bahauddin and Lahore regarding police pressurising bus drivers not to take PTI supporters to the rally.

According to her, obstacles were being created, pressure was being used and threats were being made to stop party workers and supporters from attending the rally.

“Our workers in Rawalpindi have been threatened by the police,” she claimed. “Police and Intelligence Bureau are going to workers’ houses and harassing them.”

She also said that bus owners who were hired to transport supporters to Islamabad have refused to do so claiming that government has threatened to cancel their permits if they provide transportation to PTI supporters.

However, despite these hindrances, Mazari was confident that workers will attend the rally. “Our workers believe in our cause and they will reach no matter what,” she said.

Mazari said a caravan from Quetta was also en route to Islamabad and that no obstacles were reported so far. “A caravan from Dera Ghazi Khan has already reached Islamabad,” she added.

The PTI leader said that the party workers will stage a protest wherever the government will try to stop their caravans.

Sharing similar views as Mazari, Vice Chairman PTI Shah Mehmood Qureshi, while addressing a press conference at PTI Central Secretariat in Islamabad, stated that the government is showing undemocratic behaviour ahead of the protest.

Punjab Law Minister Rana Sanaullah denied these allegations and said that they were baseless.

He claimed that bus stations were not closed and services were operational. “No restrictions have been placed by the government but no one will be allowed to enter with firearms as mentioned in the no-objection certificate (NOC) issued to the party,” he continued.

“Intelligence agencies have informed us of a security threat on the two rallies taking place tomorrow and placed them on red alert,” told Sanuallah.

Pakistan Awami Tehreek is also holding a demonstration in Rawalpindi tomorrow against alleged rigging in the May 11 general elections last year.