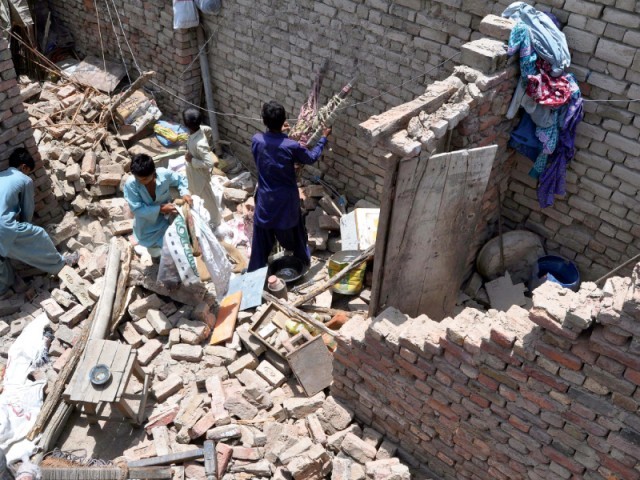 Earthquake survivors remove their belongings from the rubble of a damaged house in Nawabshah. PHOTO: AFP

Over 51 people including women and children were injured as roofs of several houses caved in the city’s densely populated area. The quake struck with a preliminary magnitude of 4.6, according to meteorological department.

Local authorities said that the quake hit the area with a magnitude of 5.0 with shocks felt in Nawabshah and several nearby tehsils including Noshehro Feroze and Sanghar District.

The aftershocks of the temblor were felt for an hour when it struck at 3.50 am, forcing panicked residents out into the streets as buildings and houses swayed. Many people in the area broke bones during the collapse of mud buildings which were unable to survive the tremors.

A Met Office official said the quake was followed by two aftershocks measuring 4.7 and 4.9 magnitude with epicentres in the surroundings of Nawabshah.

Commissioner Hyderabad division, Jamal Mustafa Syed said that the residents reported four shocks between 3.50 am to 4.50 am. The second shock followed at 4.12 am and the third at 4.47 am.

“The quake has caused some losses but the people, their houses and other belongings are largely safe,” Syed said after touring the Peoples Medical College hospital, where the injured were admitted.

According to medical superintendent Dr Hashim Langha, five of the injured persons were in a critical condition in the intensive care unit.

A local resident Ghulam Mustafa said that Taj Colony neighbourhood in Nawabshah was the worst hit. The roofs of many of the houses there had crumbled, he said, with electricity supply to the area disrupted. The deceased were identified as Lakhmir Mallah and Ghulam Muhammad Khaskheli. Mallah’s house in Taj Colony collapsed, burying him under the rubble, while Khaskheli died of cardiac arrest, which his family claims was triggered by the quake.

“There were no cutter machines to remove the debris to pull out anyone buried alive or dead in their homes,” complained a resident of the colony where Mallah died.

Benazirabad, like most districts in Sindh, lacks an effective disaster management system. The local people, volunteers and police helped each other to rescue the calamity-hit people.