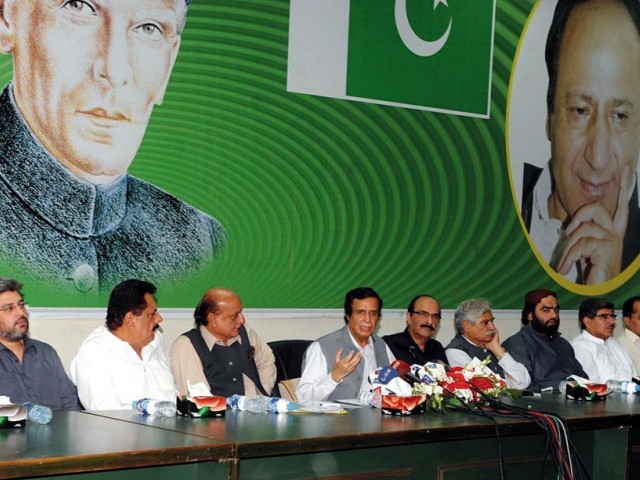 The former chief minister demanded a high-powered judicial commission for investigating the rigging allegations. He ‘revealed’ key players involved in orchestrating the rigging: Pakistan Muslim League-Nawaz (PML-N) leaders Nawaz Sharif and Shahbaz Sharif, former chief justice Iftikhar Chaudhry and a judge that he refrained from naming; and the modus operandi of how “they stole our mandate”. He said caretaker chief minister Najam Sethi was not involved in rigging.

The chief election commissioner (CEC) had two major responsibilities in the May 11 elections, Elahi said. The first was to organise and conduct free and fair elections and the second was to announce the election results. “Unfortunately, he did neither,” said the PML-Q leader.

Elahi also criticised former chief justice Iftikhar Chaudhry’s “unconstitutional meddling” in the affairs of the Election Commission of Pakistan (ECP) during the May 2013 elections.

Fakhruddin G Ebrahim, the CEC at the time, invited leaders of all political parties to the ECP office where he assured them that no institution would be allowed to intervene in election matters. “But the very next month, ex-CJP Chaudhry wrote a letter to returning officers and visited returning officers and addressed their gatherings,” Elahi said. “This was unconstitutional.”

The PML-Q leader alleged that Justice Chaudhry was not the only the “external authority” to interfere in the ECP’s affairs. “Even before all the votes were counted, Nawaz Sharif and Shahbaz Sharif announced their party’s victory…thereby relaying a message to the returning officers to grant them a clear victory,” Elahi claimed.

He asked why Justice Chaudhry had distributed shields and awards among retuning officers after the elections when they had only performed the tasks assigned to them. “The CEC resigned immediately after the elections because he was disappointed by the extra-constitutional meddling,” said the PML-Q leader.

According to a report by the Free and Fair Election Network several polling stations had been shuffled only three days before the election, affecting the polling in 93 National Assembly seats, Elahi said. “Only the election commission can elaborate on the facts behind the mass rigging during the election,” he added.

He refuted Imran Khan’s claim that Sethi had been reappointed as Pakistan Cricket Board chairman to reward him for fixing elections in 35 constituencies.

Elahi said Sethi’s role had been transparent and neutral and he did not have the power to influence the election as all such powers were in the hands of the chief election commissioner.