Funk and reggae at the Music Mela

Funk and reggae at the Music Mela 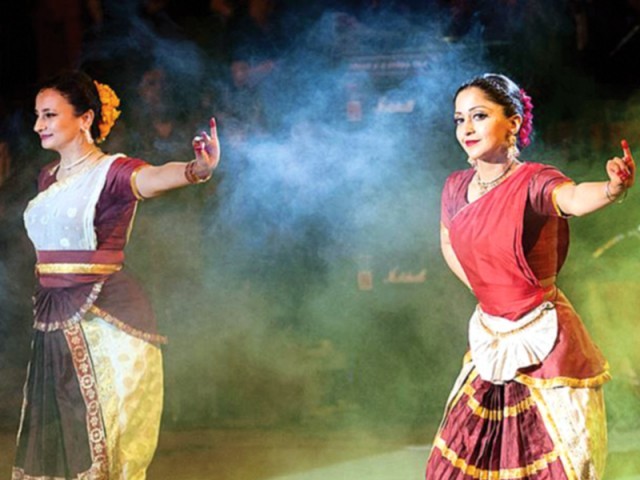 For someone who felt their stars were out of alignment, Zeeshan Mansoor and his band the Malang Party, did pretty well at the Music Mela.

Malang Party was among the three bands that represented Pakistan’s new-wave rock music landscape on Saturday, the second day of the Music Mela, which attracted hundreds of music enthusiasts.

Dreadlocked Mansoor, the band’s singer and guitarist, had some trouble with sound, along with a burnt keyboard. “Sitaray gardish mein hain (my lucky stars are out of alignment),” he said at one point during the performance, visibly frustrated.

But Dil Jalay, the band’s first nationwide single, was a hit with the crowd, more so perhaps, for its populist lyrics about heartache than the music itself. The song elicited a vehement encore request from the crowd, which Malang Party fulfilled.

The funk and reggae in Malang Party’s music got the audience, who were starved for space to dance in the amphitheatre venue, to shake their legs and tap their feet to the exuberant beats. The band entertained with their single Bara Meel, but the song Wo Kaun Hai fell flat and failed to inspire. Malang Party was followed on stage by Poor Rich Boy (and the toothless winos), a young band from Lahore, who, despite their spontaneous bursts of energy, appeared to struggle to connect with a largely desi crowd.

Poor Rich Boy’s music, which consisted of songs such as Alice, Fair Weather Friend and Old Money, was a significant departure from the overall mood of the Music Mela, which mostly showcased folk and traditional music from across Pakistan over the weekend.

In rare moments, the band unleashed raw energy on stage through music and performance, a testament to the true potential. But the theatrics were exhibited so randomly that, like a misfired gun, their overall performance was drowned in its own sonic mess.

The atmosphere changed rapidly as Islamabad-based rock band Qayaas arrived on stage with their mature sound and brilliant guitar skills. The overeager smoke machine released some fog, confetti rained from above and sparks flew from the stage as the award-winning band started playing.

Lead guitarist Khurram Waqar began with a terrific guitar solo, after which he was joined by vocalist Umair Jaswal, who worked up the audience like a genuine stage performer. Young members of the crowd gathered around the stage and shouted at the top of their lungs as Jaswal whirled the microphone stand over their heads.

The band also played a number of familiar tunes from their album Umeed, some of which were featured in the blockbuster Waar.

Parliamentarians argue over Pakistan’s ‘highest power tariff in the region’