Hindus, other minorities in Pakistan face surge of violence

Hindus, other minorities in Pakistan face surge of violence

Many compla­in the proble­m has become worse since Prime Minist­er Nawaz Sharif came to power last year.
By Reuters
Published: May 6, 2014
Tweet Email 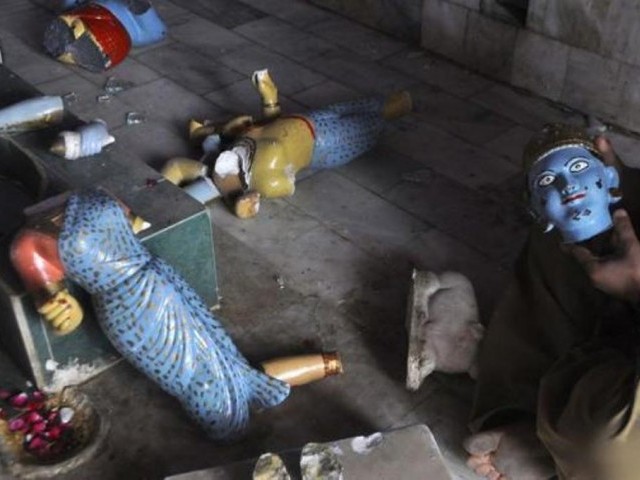 A member of the Hindu community holds a damaged statue inside a temple that was attacked in Larkana in Sindh. PHOTO: REUTERS

An accusation of blasphemy sparked the attack in the town of Larkana, human rights activists said, part of a spike in violence against Hindus in predominately Muslim Pakistan.

March was the worst month for attacks on Hindus in 20 years with five temples attacked, up from nine during the whole of 2013, said Life for All, a rights group. But it’s not just Hindus who feel victimised.

All minorities in the country – Hindus, Christians, Ahmadis and even Shia Muslims – feel that the state fails to protect them, and even tolerates violence against them.

Non-Muslims make up a small fraction of the 180 million people in nuclear-armed Pakistan.

Muhammad Ali Jinnah, the hero of the country’s creation as a haven for the sub-continent’s Muslims, ushered in independence in 1947 with a promise to minorities that they would enjoy freedom of worship and equality without discrimination.

But for many members of Pakistan’s minorities those words ring hollow.

The US Commission on Religious Freedom said in a recent report that conditions in Pakistan had “hit an all-time low” and governments had failed to adequately protect minorities and arrest perpetrators of crimes against them.

“Pakistan is increasingly failing to protect its minorities for two broad reasons: principally, rising religious intolerance and the space ceded to violent ideologies,” said Sherry Rehman, who was a government minister and ambassador to the United States under the previous administration.

Activists say tolerance of militancy provides cover for opportunist attacks by those who just want to grab land, homes or businesses of minority neighbours under the guise of religion.

Hindus and members of other minorities say the situation has worsened since Nawaz won an election last year. Nawaz has close ties with Saudi Arabia, whose brand of conservative Wahhabi Islam is preached by many of the people who denounce minorities.

Whatever the cause of the surge of violence and abuse, many Hindus in Punjab are feeling beleaguered and increasingly looking to get out. More than 100 families are leaving for India each month, rights groups say.

Among those who have gone were Munawar Jee’s brothers and their families after his married sister was kidnapped last year. Her abductors got her certified as a Muslim convert and re-married her off the next day. Recanting Islam would mean she could legally be put to death.

“Losing my sister is the biggest regret of my life,” Jee told Reuters at his shoe shop in Punjab’s Rahim Yar Khan district. He said he would soon join his family in India.

Hindus say their women are easy targets for rape or forced marriage. Temples are attacked and looted. Accusations of blasphemy, punishable by death, are increasingly being used to drive Hindus from their homes, they say.

Punjab, the prime minister’s heartland, had until recently been a refuge for Hindus compared with some other areas.

But the province has also become a power base for militant groups.

Federal Information Minister Pervaiz Rashid did not return calls seeking comment on policy towards minorities. A Punjab government spokesperson rejected the suggestion that authorities were not doing enough to help Hindus.

“The government is committed to protect its religious minorities,” said Shoaib Bin Aziz, adding he was not aware of an increase of Hindus leaving. He denied that the provincial government was soft on militancy.

“Terrorists are not friends of anyone,” he said. “The Punjab government does not have soft corner for any terrorist organisation.”

“What hope can Hindus see in the country’s future?” Sharma questioned.

BME communities to make up one third of UK by 2050: Study