The event paid tribut­e to Faiz and featur­ed Tina Sani and Nighat Chaudh­ry.
By Hifza Jillani
Published: May 6, 2014
Tweet Email 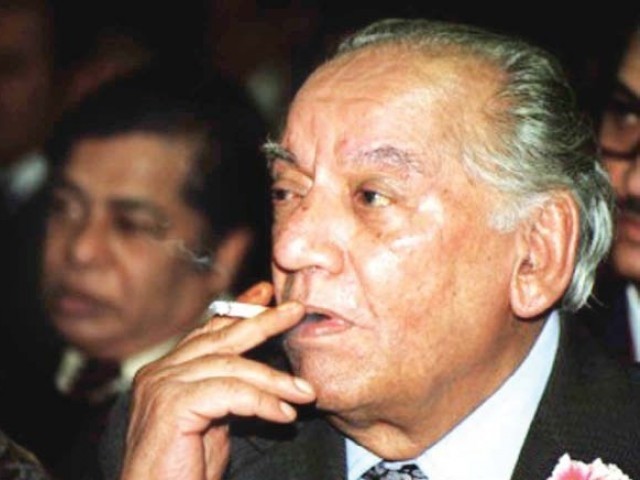 "The greatest poet of the subcontinent, Faiz spoke for the poor and the common man,", said Sarfaraz Rajar, a poet and president of the Pakistan Peoples Party's (PPP) culture wing. PHOTO: FILE

KARACHI: Faiz Ahmed Faiz was a revolutionary and for his troubles, he was given a maximum sentence during his lifetime.

Today, he is celebrated by the world and continues to be a symbol of resistance and struggle for rights and the provincial culture department paid tribute to the great poet on Sunday evening at Frere Hall. Lit up by fairylights, the Frere Hall looked a surreal red and a large stage was set up beneath the open sky for the event.

“The greatest poet of the subcontinent, Faiz spoke for the poor and the common man,” said Sarfaraz Rajar, a poet and president of the Pakistan Peoples Party’s (PPP) culture wing. “He was blessed with a command over words that few possess and knew how to use them in his poetry.”

When the culture department approached Imdad Hussaini to translate the works of Faiz into Sindhi, he initially refused. “The poet satisfied Sindhi poets and every poet knows Urdu, and what if we lose him in translation?” were the issues he raised. But eventually he took it upon himself to not just translate it but to make it relatable to young Sindhi poets and poetry lovers. “What Hussaini has achieved is no less than a miracle and no one else could have done what he has,” said Hussaini’s wife, Dr Sehar Imdad, who is a poetess and also has a doctorate in literature.

“All I did was changed the words to Sindhi and ensured that I follow the same format as the original,” Hussaini told The Express Tribune. “If you look at the translated poetry, you will see that Faiz’s style is still prominent in it.”

Talking about the event, Hussaini, said it was unfortunate that it revolved around Faiz’s Urdu poetry while no coverage was given to the Sindhi translation or his devoted work. “Such events should highlight the intrinsic culture not the ‘fusion contemporary’ culture to appeal to the public,” he said.

Not a man with a shortage of words – even the preface of his translation is 60 pages long – Hussaini was unhappy with being given only 10 minutes to speak. He wrote a poem for the occasion in which he highlighted the futility of his task. “How can I talk about centuries in just a few minutes?” he asked.

The special assistant to chief minister on culture and tourism, Sharmila Faruqi, spoke after Hussaini and was quick to make a link between the PPP and the poet. “PPP and Faiz have shared a long relationship. Benazir Bhutto gave the highest civilian award to Faiz and 2011 was declared the year of Faiz,” she said. “My mentor and boss, Asif Ali Zardari, has organised this event and it was he who suggested that Faiz’s work should be translated into Sindhi. I also thank the chief minister for allocating a special package for publishing books on Faiz.”  She concluded her address by quoting the man of the hour himself and dedicated the poetry to Faiz and Benazir Bhutto.

After the speakers had paid their tribute to Faiz, the audience was treated to a performance by Nighat Chaudhry. Tina Sani then came on stage in the end to leave the audience reminiscing about Faiz and his genius. Taj Haider sat on the floor, enjoying the performances of Chaudhry and Sani with his wife, while Sikandar Mandhro and his wife sat in the front row.