Badakhshan tragedy: With 300 houses buried, search for survivors called off

Badakhshan tragedy: With 300 houses buried, search for survivors called off 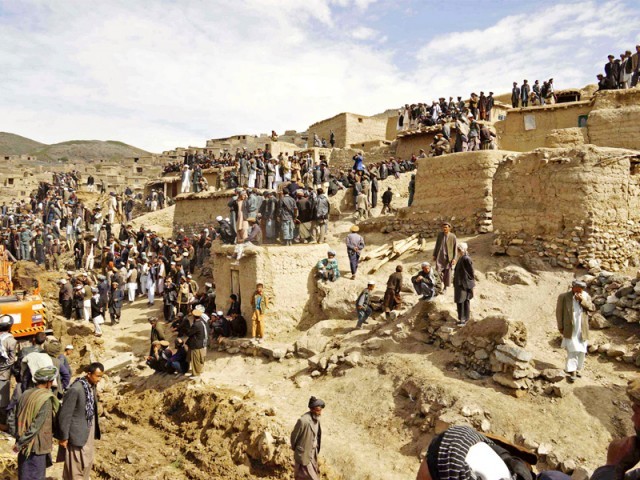 Rescuers search for survivors trapped under the mud in Argo district of Badakhshan. PHOTO: AFP

Rescue teams abandoned the search for survivors on Saturday after a landslide buried as many as 300 houses in a hillside village in northern Afghanistan.

Local people and emergency workers using shovels tried in vain to find victims trapped under the massive landslide that engulfed the Aab Bareek village in Badakhshan province. Officials said that the final death toll could rise as high as 500 after Friday’s disaster, updating earlier information that 2,500 people were feared dead.

“Based on our reports, 300 houses are under the debris,” Badakhshan Governor Shah Waliullah Adeeb told reporters at the scene.

“We have a list of around 300 people confirmed dead,” he said. “We cannot continue the search and rescue operation anymore, as the houses are under metres of mud. We will offer prayers for the victims and make the area a mass grave.”

“The first figure (of 2,500 feared dead) that we announced was obtained from local people, not from our technical team,” Gul Mohammad Bedar, the deputy governor of Badakhshan, told AFP. “We think the death toll will not rise beyond 500.”

The news agency Reuters, however, quoted a spokesman for the governor as saying the death toll exceeded 2,100 people. The International Organisation for Migration also said around 2,700 people were either dead or missing.

Relief teams arrived at first light on Saturday to be confronted by the enormous scale of destruction.

Many villagers were at Friday prayers when they were entombed by the torrent of debris. A second landslide hit people who had rushed to assist those in need. “I have lost my sister, my house was partially destroyed,” Noor Mohammad, 45, told AFP. “We can’t really get anyone out of the debris. We have lost hope of rescuing anyone.”

“There is a very thick layer of mud. It is very difficult for people to take bodies out,” Sayed Abdullah Homayun Dehqan, provincial director of the Afghan National Disaster Management Authority, said.

“There is fear of another landslide. Our assessment team has seen a crack in a nearby hill,” he added. President Hamid Karzai expressed his condolences to those affected, and announced a national day of mourning on Sunday.

The UN mission in Afghanistan said its staff had been working on the ground, along with the Afghan Red Crescent and other aid groups.

“The immediate focus is on approximately 700 families displaced either directly as a result of this slide or as a precautionary measure from villages assessed to be at further risk,” UNAMA said in a statement.