Underage marriages: When girls are made home-makers too soon

Underage marriages: When girls are made home-makers too soon

Sindh Assemb­ly may have set an encour­aging preced­ent, but much needs to be done across the countr­y.
By Riaz Ahmad
Published: May 4, 2014
Tweet Email 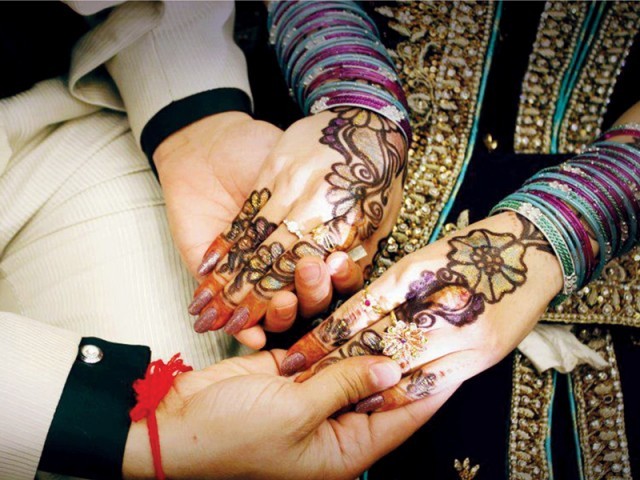 “She was barely 12 years old and a student of class-V. I still remember how innocent Shaista looked in her bridal dress,” said Sulaiman while talking about his marriage. He was 17 then, and the couple spent three years together. “She never asked for a single pair of clothes or shoes. She was too afraid to talk to me as I often beat her to teach her manners. Despite my best efforts, she remained stubborn.”

Sulaiman wanted her to be more diligent in getting his shoes polished and clothes pressed. He also wanted his wife to be flirtatious and smiling constantly. “One day I asked her to give me a glass of water and she retorted, ‘what for’? So, I divorced her, despite the fact that we had a beautiful baby boy,” he explained.

Sulaiman, a resident of Akhorwal area of Darra Adam Khel, then married another girl who was 16 years old and was what he calls a ‘better wife’.

Thus, the cycle of child marriages continues in the country.

The victims of these marriages are not just restricted to underage girls. Shah Miran of Darra Adam Khel, now 50 years old and father of six, got married at the age of 12. “My wife was 19 and the daughter of a local influential Malik who was my father’s friend. The two men wanted to cement their bond by means of this marriage,” he recounted, adding that his wife was not very beautiful but was a good mother.

“I was a child and knew nothing about marriage,” he said. Traditions often hold together marriages, according to Miran. Out of Akhorwal’s 25,000-strong population, he has seen only four divorces in the last five decades in his clan.

“I wouldn’t call it child marriage because a 16-year-old boy is a zwan (adult male) and a 14-year-old girl peghala (adult woman),” he said.

In the last one month alone, Miran has attended six underage marriages in his village. He believes it is a successful tradition.

“Young people need companionship of the opposite sex which is natural. We can’t let them be boyfriend and girlfriend like in the West. Therefore it is best to marry them off at an early age so that they can have a legal relationship.”

“In 2012, I came to know about the marriage of an 11-year-old girl Samina in Dagai village of Swabi,” Arif Shah, a local journalist and general secretary of the NGO Samaji Behbood Rabita Council (SBRC), told The Express Tribune. He contacted the then DPO Imran Shahid who directed the concerned SHO to stop the marriage, which they successfully did.

“The family was from Mohmand Agency. The boy’s family had paid Rs10,000 to the girl’s family. Some 80 per cent marriages in this community are child marriages,” he said. They made the families wait till the girl was 16 years old, and till then the boy’s family had to pay Rs500 per month.

“Lack of education, local traditions and large number of children are the main causes of child marriages. But poverty remains the biggest reason.”

In Mattani, every second family has a child bride, creating many social problems.

“My own daughter was married at the age of just 15,” said a local elder, Haji Subhan.

“Now I pay for the medical bills of my daughter and am responsible for most of her expenses,” he said, adding that her husband, himself too young, cannot support his family, and has no decent job as he is mere matriculate.

There is no reliable data available about child marriages, as most of these incidents are not reported to the police. A police official shared that in his 15-year career, he had come across just one reported case of child marriage.

As per the Pakistan Demographic and Health Survey (PDHS) 2012-2013, 35 per cent of Pakistani women aged 25-49 are married by age 18 and more than half (54 per cent) are married by age 20. Eight per cent of adolescent women age 15-19 are already mothers or pregnant with their first child. Young motherhood is highest in Khyber-Pakhtunkhwa (K-P) at 10 per cent.

Shabina Ayaz, resident director of the Aurat Foundation, said that there has been no scientific survey about child marriages in Khyber-Pakhtunkhwa (K-P).

She said it was unfortunate that as per the Child Marriage Restraint Act 1929, the legal marriage age for a girl was 16 years, and 18 for a boy. “A 16-year-old girl can’t vote, have a bank account or even have an ID card, but she can marry and bear children.”

Arshad Mehmood, director advocacy and child rights governance at Save the Children, said that there was no penalty for those found guilty of child marriage. “There is only a fine of Rs1,000 and a maximum one-month imprisonment under the Child Marriage Restraint Act 1929,” he said, adding that the fine was a reasonable amount when the act was introduced but it is hardly sufficient enough today.

A few days ago, the Sindh Assembly set a precedent by passing a law declaring marriage below the age of 18 years punishable by law and a violation of the rights of children, becoming the first province to do so.

Rights experts hope other provinces will follow the example soon (All names have been changed to protect identities.)

Correction: In an earlier version of this story it was stated that Arshad Mehmood is the deputy director of Save the Children. The error is regretted.