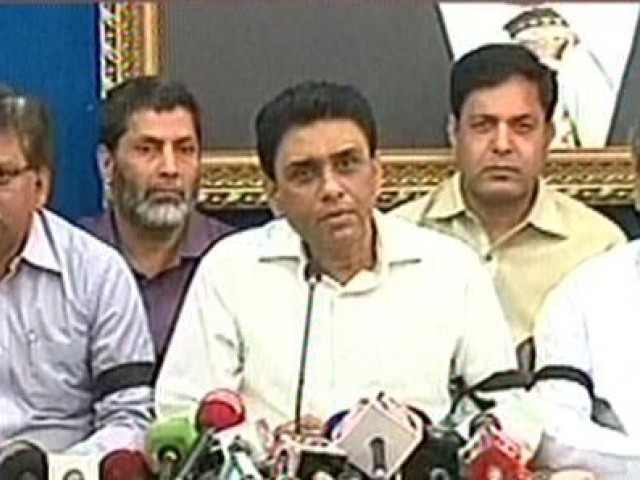 He was addressing an emergency press conference held by the party on Thursday after bodies of four of its workers, whose bodies were found on April 30 in the Malir Memon Goth area of Karachi, were identified by their family members.

The deceased were identified as Ali Haider, Sameet, Salman Mushtaq and Faizan Uddin. Siddiqui added that two party workers, Sohaib and Ziaur Rehman who were picked up with the four deceased, were still missing.

He informed the media that of the nine workers arrested, six had been missing until Thursday, when four of the missing had been identified among the four deceased.

“We are concerned about the lives of these two workers,” he said. He appealed Prime Minister Nawaz Sharif, President Mamnoon Hussain, Chief Minister Sindh and Governor Sindh to take measures for the security of MQM party workers who were still missing.

Siddiqui said that people have voluntarily started closing their shops in the city and assured that the day of mourning will be absolutely peaceful.

“We have filed petitions in courts every time one of our worker is arrested. The courts have, however, failed to provide justice,” Siddiqui said.

Businesses and public transport in Karachi closed/stayed off the roads soon after the announcement.

Karachi Transport Union President Irshad Bukhari said that members of his association would not take the risk to run their transport, while All Karachi Traders Union President Atiq Mir said markets and shops would be closed.

Private Schools Management Association also announced that schools would be off on Friday.

MQM Chief Altaf Hussain, later on Thursday condemned the extra-judicial murders and termed them as a “barbaric act”.

He said: “We have repeatedly raised voice over the raids, abductions and torture on MQM workers carried out by the death squads of police and other law enforcement agencies.”

After the announcement businesses started closing down and there were incidents of aerial firing in several areas of the city. Public transport had also ceased operation in the city.

IG Sindh Iqbal Mahmood alerted the police in the city and ordered them to arrest anyone who was forcefully closing down businesses in the area.

A similar situation was observed in Hyderabad, Express News reported. Unknown individuals forcefully closed down businesses in various areas of the city.

Additionally, an investigating committee has been formed which will be led by AIG Karachi Shahid Hayat.

When I watch people stranded at Petrol Pumps in #Karachi on days like this…….

Condemn the killing of MQM worker, but shock to see Karachi city was terrorized & forcefully shut down within few hours by armed hooligans.