His oppone­nts compla­in to the electi­on commis­sion that his use of the party symbol broke the rules.
By Agencies / Aditi Phadnis
Published: May 1, 2014
Tweet Email 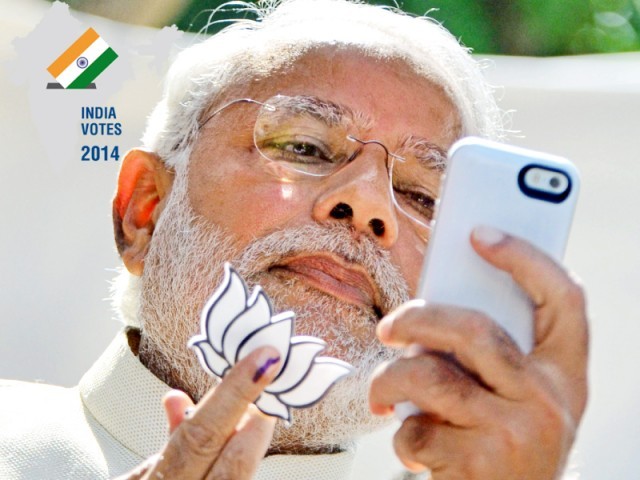 The Gujarat Police on Wednesday filed an FIR against Bharatiya Janata Party (BJP) leader Narendra Modi and others for poll code violation for holding and addressing meeting after casting vote, on direction of the Election Commission of India (ECI).

Modi ran into trouble with ECI on Wednesday over his actions which were televised live, accusing him of violating a code of conduct by campaigning in a polling area. He stirred a controversy by holding a press meet near the polling booth in Ranip area of Ahmedabad. He was holding his party symbol ‘lotus’ while showing his inked finger. Also, during the entire interaction with the press, Modi kept holding the ‘Lotus’ symbol.

He voted in the city of Ahmedabad in Gujarat state before taking a ‘selfie’ of his inked finger and flashing his party’s symbol of the lotus flower to crowds, as voters queued early in 89 constituencies across nine states and territories for the latest stage of staggered voting.

It is unusual for Indian politicians to give speeches after voting and Modi’s opponents complained to the election commission that his use of the party symbol broke the rules.

“The Commission is of the view that by holding that meeting and also by addressing the same today when the polling is going on in the entire state of Gujarat and in different parts of the country, Modi has violated the provisions of Sections 126 (1) (a) and 126 (l) (b) of R.P. Act 1951. Therefore, the Commission directs under Article 324 of the Constitution and all other legal provisions enabling it in this behalf that complaints/FIR as the case may be, should be filed against Modi and all others who were involved in the convening and holding of the said meeting,” the ECI said in its order. The returning officer has been directed to comply to the orders immediately.

The ECI further observed, “From the substance, tone and tenor of the address made by Modi and the statements made by him and the manner in which the symbol ‘Lotus’, of the BJP was being displayed by him at the said meet, thereby displaying to the public election matter by means of television in polling areas going to polls today it is evident that the said address was in the nature of political speech intended and calculated to influence and affect the result of elections in the constituencies going to polls today, not only in Ahmedabad but also in all other constituencies in the state of Gujarat and elsewhere in the country.”

Election rules say politicians must not make public rallies or use media to “display to the public any election matter” within 48 hours of an election. Gujarat police chief PC Thakur said a preliminary case was launched against Modi at the request of the election commission.

“The Ahmedabad crime branch has begun investigations,” Thakur said. Maximum punishment for violating the rule is two years imprisonment, although Modi is unlikely to be charged. Politicians in India routinely face criminal cases which rarely reach the courts.

In a mainly Muslim area of the city, voters said they would turn to Congress and anti-corruption campaigners the Aam Aadmi party, claiming the BJP was biased against the religious minority.

“I cannot tell you, but it was certainly not the BJP,” said Salim Qureshi, 33, who works in a butcher’s shop, when asked who he voted for.

With the Congress campaign flailing with just over two weeks to go, another Gandhi, Rahul’s sister Priyanka, has stepped up to lead a fight-back by India’s most famed political dynasty. Priyanka this week called the battle against Modi and the BJP a ‘fight for the heart’ of Hindu-majority but constitutionally secular India as the campaign grows increasingly bitter.

About 140 million people were eligible to vote on Wednesday including in Modi’s Gujarat and the battleground states of Bihar and Uttar Pradesh which alone sends 80 lawmakers to India’s 543-member parliament.

Voters outside polling booths in a Hindu-dominated area of Ahmedabad said they would cast their ballots for Modi, the son of a tea-stall owner who is pledging jobs, investment and economic revival.

“He has brought development to Gujarat and generated ample employment for youth here. He can do the same across India,” said marketing executive Mrunal Panchal, 29.