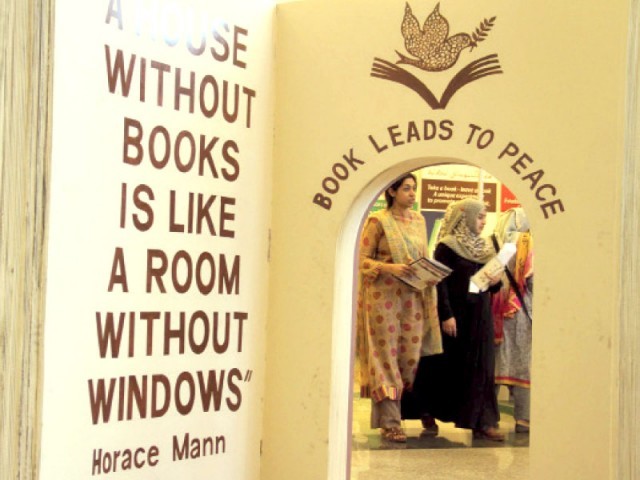 people walk through the decorated halls of the venue on Tuesday. PHOTO: MUHAMMAD JAVAID/EXPRESS & INP

A large number of students, scholars and fans of reading gathered at the Pak-China Centre to celebrate literature from across the country on Tuesday morning.

Clusters of students from different schools and universities flocked out of school buses in excitement.

The event organised by the National Book Foundation (NBF) in connection with the fifth National Book Day, began with the hoisting of a book flag and oath taking, followed by speeches. Minutes later Lollywood actress Reema Khan, dressed in peach-pink outfit, minimal makeup and a striking smile managed to steal the show. A crowd quickly gathered outside the hall to catch a glimpse of the celebrity.

Khan, encircled by staff that strategically elbowed the crowd to create space for the celebrity, finally managed to get to the middle of the venue. She discussed the importance of literature, culture and education. The speech was short and simple, allowing her to successfully glide out the exit door, making occasional pauses to pinch the cheeks of children standing on their toes to get a glimpse of her.

While more than hundred stalls of publishers, NGOs, bookstores and universities were displaying books at discounted rates, the lone stall established at the entrance managed to get as much attention as the celebrity at the event.

With a signboard stating “one book free” for academics, it had several interested students hovering around, shuffling through piles of free books.  A volunteer at the registration desk was busy enlisting books and registering the person’s credentials.

The Pan-Humanity from Peshawar had gotten 40 boxes with 30 to 35 books in each-which they are hoping to distribute in their three days that they are here. The organisation started off in 2006, distributing original books from foreign publishers free-of-cost among earthquake affected children. Till date, the organisation has distributed 25 million books to universities. An array of literature, from fiction to non-fiction and academic books, which are otherwise quite costly, are handed out free through this initiative. “We are trying to replace extremism with books,” said Pan-Humanity Chairman Riaz Mohammad.

Fazal Siddiqui from the University of Lahore was skimming through a few scattered books at the stall. He said the wide range of topics was an interesting approach to get more people to pick up books and get into the habit of reading. Hamid Qaiser, a short story writer, said, “Reading should be affordable. It is unfortunate that imported books are hard to get,” said Qaiser.