It is learnt that the former milita­ry ruler arrive­d in the city to file the applic­ation in the SHC.
By Our Correspondent
Published: April 21, 2014
Tweet Email 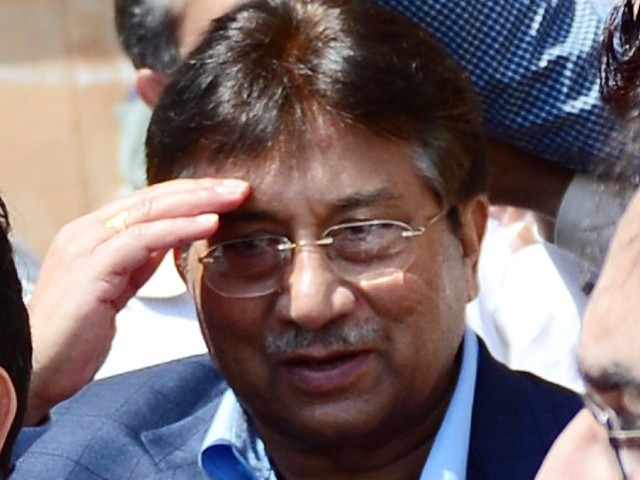 Former military ruler Gen (retd) Pervez Musharraf’s legal team is expected to file today (Monday) an application in the Sindh High Court (SHC) for removal of his name from the Exit Control List (ECL), The Express Tribune has learned.

It is learnt that the purpose of his arrival in the city is to file the application.  Sources in his party, All Pakistan Muslim League (APML), said Musharraf would stay in the city for about a week and would meet his friends and family members.

“He is fine and has come to Karachi to meet his family members, relatives and friends,” said one of the leaders of his party.

It was learnt that a doctor in the PNS Shifa would visit Musharraf’s residence on Monday to check him up for vertebrae pain. The doctor is his personal friend, a source said, adding that the former military ruler is in contacts with his doctors from London through phone and Skype.

“He won’t go through any medical test during his stay in Karachi. However, it depends upon doctor’s recommendation,” the source added.

It was also learnt on Sunday that Musharraf wanted to meet his friends and family members during his stay in the city where he grew up.

On Monday Musharraf also visited one of the houses close to his place of residence in Zamzama area of Karachi. He stayed there for some time and was served tea, sources claimed.

Security around his residence

All the routes leading to the area have been cordoned off after the arrival of Musharraf and the residents of the neighbourhood are facing hardships even in coming out of homes and going back. Law enforcing agencies do not allow anyone to enter the area.

Rumours were in circulation that the former president would visit the PNS Shifa or a three-member doctors’ team would visit his residence and reporters of different media outlets remained in the vicinity throughout the day. However, he neither visited the hospital nor any medical team visited his residence till late Sunday evening.

“Why should a team examine him when he is completely fine?” a leader of his party said, when contacted by The Express Tribune. Requesting anonymity, he said the media had created hype without any sound reason. Here it must be noted that his party has not appointed any key person to keep in touch with the media.

The supporters of Musharraf also held a protest outside the Karachi Press Club, chanting slogans in his support, demanding to remove his name from the ECL.

Malir River: From the sewer to a recreational facility