Fatal accident: Passengers asleep on bus wake up in hospital after mishap

Fatal accident: Passengers asleep on bus wake up in hospital after mishap

Coach collid­ed with a traile­r near Pannu Aqil, killin­g 42 people on board.
By Sarfaraz Memon
Published: April 21, 2014
Tweet Email 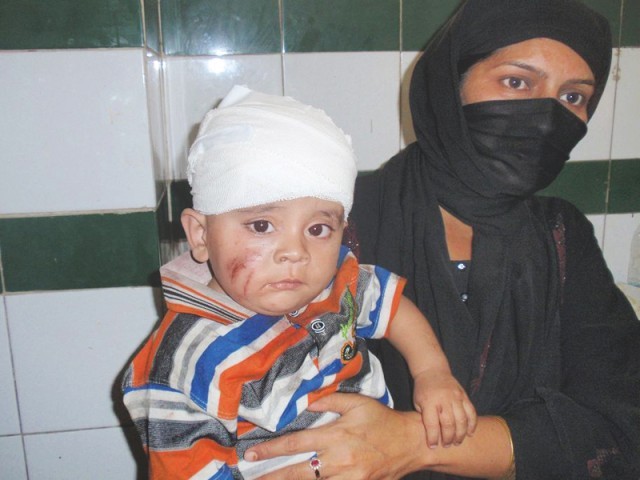 42 passengers on the coach headed to Karachi lost their lives while another 27 were rushed to hospital. PHOTO: EXPRESS

Jawaid Lodhi was eagerly getting dressed at home to receive his wife and children at the Hyderabad bus terminal when the 8am news came on television.

The Sunday morning news reported that the passenger coach from Dera Ghazi Khan had collided with a trailer near Pannu Aqil, killing 42 passengers – including women and children – and injuring the remaining passengers.

Jawaid’s brother, Abid Lodhi told The Express Tribune that they rushed to the taluka hospital in Pannu Aqil after hearing about the accident. “What we saw there was enough to stop our heart beats,” he said in a shaky voice. “The bodies of my brother’s wife Salma, and her three children Minhal, Nafal and Sania were lying there.” Jawaid’s son, Uzair, who fractured his leg in the accident, was taken to the civil hospital in Sukkur.

Kausar was sleeping when the coach pummeled into the trailer and when she gained consciousness, she found herself in the hospital. “I don’t know who was at fault,” she said. “However, one thing is certain that minor mistakes and recklessness has cost many people their lives and left all of us others injured.”

“Most of the passengers were sleeping at the time therefore nobody knows the actual reason for the accident,” she added. “We had gone to see my parents in Dera Ghazi Khan since my children’s exams had ended. Nobody knows right now what is going to happen to my children.”

Zulqarnain hails from Jhang and makes bodies of buses for a living. He was travelling to Hyderabad to attend his friend’s wedding. He was talking to a fellow passenger on the bus and fell asleep around 3am. “The only thing I heard was a huge bang and then I blacked out,” he said.

Shahid Imran – who suffered a fractured leg in the incident – also belonged to Jhang and was going to Karachi for business. “I was sleeping and when I opened my eyes, I was in a hospital bed,” he said.