There is no way to get around struct­ural reform of the energy sector.
By Editorial
Published: April 16, 2014
Tweet Email 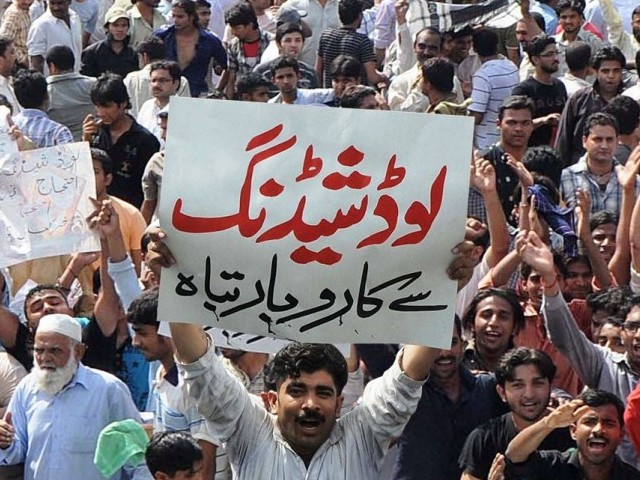 Power shortages have been a recurring issue in the country and one which the masses have become very sensitive to. PHOTO: EXPRESS/FILE

It had never really left us, but our arch-nemesis, that tormentor of the Pakistani people is back: load-shedding is not only rising but is expected to continue to increase in frequency as the spring turns into the sweltering summer. In all fairness to the Nawaz Administration, Water and Power Minister Khawaja Asif was quite upfront and honest about the fact that this problem would not go away for at least the first three years of their term. But that meant that the problem had to be as bad as it was last year, with 16-hour outages in most parts of the country. Nor does it excuse the fact that most of the outages will be caused by a return of circular debt, a problem that the government had supposedly resolved already.

According to several reports, Pakistan State Oil (PSO), the largest oil company in the country, has warned the government that it will soon no longer have the ability to supply furnace oil to power plants across Pakistan. This is a problem that can be laid squarely at the feet of the government’s mismanagement. Not only is the PSO state owned, it is the only company that is allowed to import oil into Pakistan. If the PSO cannot pay its international suppliers, that means a halting of supplies for all of Pakistan.

And lest the Nawaz Administration thinks its Saudi friends can help, it should think again: Pakistan’s oil requirements far exceed what they were when the PML-N was last in office. In 1999, Pakistan’s total oil imports were less than $2 billion. In those days, a Saudi ‘gift’ of $500 million worth of oil — what Pakistan got after the 1998 nuclear blasts — would cover us for three to four months. But in 2013, Pakistan’s total oil imports came to just over $16 billion. A Saudi ‘gift’ of three times that size will barely cover four weeks of oil imports.

There is no way to get around structural reform of the energy sector. For all their promises, on that front this government has fallen about as short as their predecessors. Need we remind them, that is how their last two forebears lost the previous elections. Power shortages have been a recurring issue in the country and one which the masses have become very sensitive to.

A most welcome proposal