A better tomorrow: Public awareness only way to counter violence against women

A better tomorrow: Public awareness only way to counter violence against women

The semina­r aimed to encour­age studen­ts to raise their voices agains­t such evils in societ­y.
By Our Correspondent / Photo: Athar Khan
Published: April 16, 2014
Tweet Email 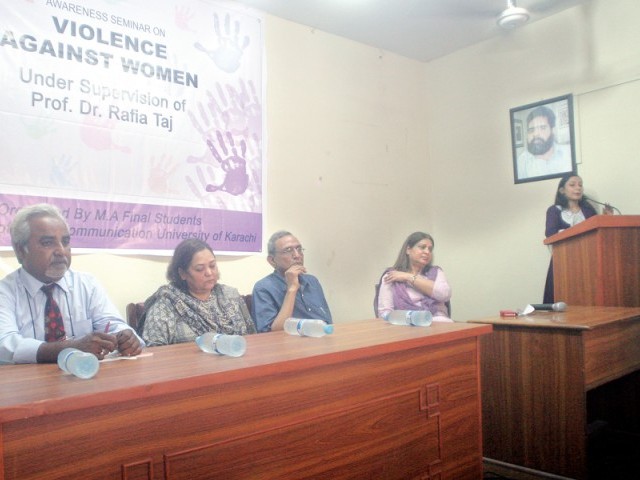 The mass communication department of Karachi University held a seminar on ‘Violence against Women’ on Tuesday. PHOTO: ATHAR KHAN/EXPRESS

KARACHI: Lack of education, awareness, non-implementation of laws and difficulty in understanding the laws are the major reasons why incidents of violence against women continue to rise.

These views were expressed by women’s rights activist Nuzhat Shireen at a seminar, aptly titled ‘Violence against women’. The event was organised at the Mass Communication Department (MCD) of the University of Karachi, by final-year students of MA Previous, under the supervision of Dr Rafia Taj.

According to a report issued by the Human Rights Commission of Pakistan (HRCP), over 7,787 cases of violence against women were reported between 2004 and 2011, said Akhtar Baloch, a board member of the HRCP. Women play an equal role in the development of society, he said, stressing the need to implement the laws punishing violence against them.

Journalist Qaiser Mehmood, had a different view. “This is a male-dominated society,” he said. “If women have accepted this evil, no one can help them.”

He explained that new laws were made as issues emerged in society. “When a new issue emerges, laws are enacted accordingly.” Subsequently, it was the job of the law enforcement agencies, the courts, the government and the general public to ensure that the laws are implemented.

Speaking about his personal experiences, Mehmood said that even in a city such as Karachi where most people were educated, the birth of a girl was frowned upon and could end up in a broken marriage. “What can we expect from the rural areas?” he questioned. He advised the youth present at the seminar to take up the cause in any way they could.

“The world’s worst laws can be effective if implemented and the best laws are wasted due to lack of implementation. Change can be enacted only if people are made aware of the existing laws.”

The aim of the programme was to spread awareness regarding the pressing issue. Students screened two documentaries highlighting the plight of women who had been made victims of violence. The focus of the documentaries was rape. “Rape is a major issue these days,” one of the organisers, Sahar Ali, told The Express Tribune.

The seminar was also part of the curriculum under the ‘Development Support Communication’ programme. Speaking to The Express Tribune, Dr Taj explained that purpose of teaching this course was to spread awareness about the social issues affecting society.

“The media has played a vital role in raising awareness about the rape cases but it often does not follow-up on the cases to see what happened to the suspects,” she lamented. “Witnessing the crime creates fear in the minds of citizens. If the media showed the punishments meted out to the perpetrators, it would encourage more people to raise their voice against the wrong-doers.

The next seminar that the students plan to organise will be based on the theme of acid attack cases.

Nutrition levels: The greener the fields, the healthier the children