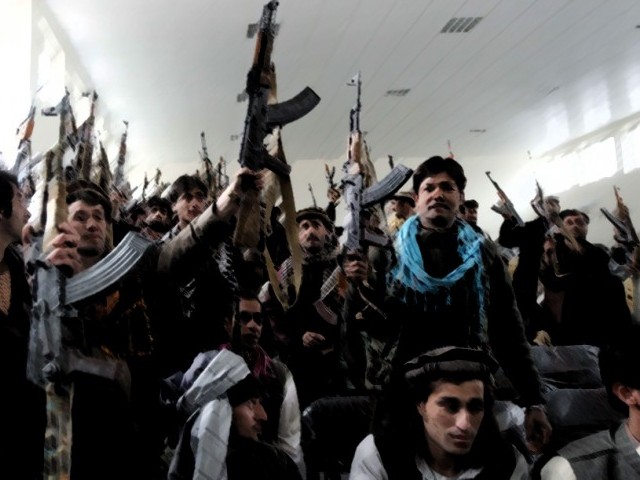 Independent sources from the area said that members of the Tehreek-e-Taliban Pakistan’s Orakzai chapter stormed the mela where buyers and retailers were engaged in the sale of drugs. PHOTO: REUTERS/FILE

BARA: Nearly 108 tribesmen from Khyber, Kurram and Orakzai agencies, who were kidnapped on Saturday from a mela by unidentified militants, were set free on Sunday. 15 tribesmen belonging to the Qamber Khel tribe from Tirah Valley, who have been associated with Ansarul Islam in the past, have yet to be released.

An official of the political administration from Bara said that according to the reports received from the area, the tribesmen were picked up in Haider Kandao, an area that lies on the confluence of Khyber Agency’s Tirah valley, Orakzai Agency and Central Kurram Agency. An annual mela of cattle and hashish was held in the area on Saturday and tribesmen from the three agencies gathered there to deal in opium and hashish as well as the sale of cattle. Militants stormed the mela and kidnapped the tribesmen, also taking with them a large cache of drugs on sale there.

The official said security forces in the area were informed of the kidnapping and tribal elders from Orakzai and Khyber agencies formed a jirga to initiate a search for the tribesmen.

Independent sources from the area said that members of the Tehreek-e-Taliban Pakistan’s Orakzai chapter stormed the mela where buyers and retailers were engaged in the sale of drugs and seized nearly 400 kilogrammes of hashish, which was burned. The kidnapped tribesmen were then taken to Dur Baba, an area near the Pak-Afghan border. The sources added that 70 tribesmen were released following mediation by the jirga late on Saturday night.

23 of the released tribesmen belonged to the Sheikh Mal Khel tribe in Khyber Agency. A member of the tribe, speaking on the condition of anonymity, said that the mela is held annually in spring and retailers from Orakzai, Kurram and Khyber agencies and Hangu sell their wares here. He said that among cattle and other household items, hashish and opium are also sold at the mela. “The mela is primarily held to deal in hashish,” he added. He said that locals received warnings from the TTP not to hold the mela. As it is one of their main sources of livelihood, however, he said the mela went ahead as planned.

An official of the FR Peshawar told The Express Tribune that they had unconfirmed reports that five alleged militants were killed in the region.

Meanwhile, there was no official word from ISPR.

Passing the buck: PTI to protest along with public over power outages