The newly appoin­ted SHO was to leave for snap-checki­ng but a grenad­e attack in Zamaza­ma change­d her plans.
By Rabia Ali
Published: April 9, 2014
Tweet Email 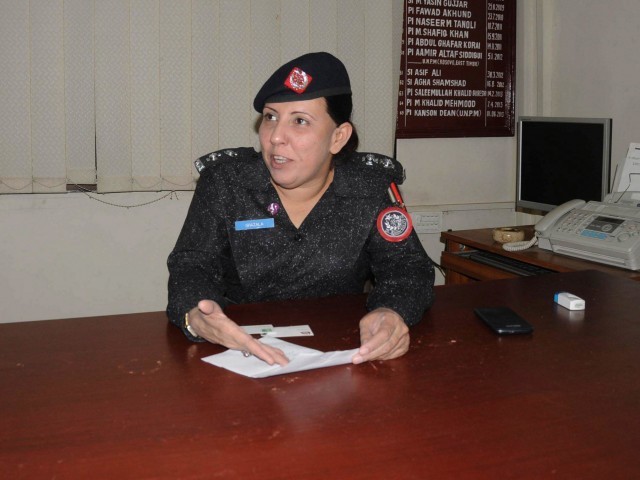 The relatively spacious office of the SHO at the Clifton Police Station boasts a long wooden plaque bearing the names of 65 of its former occupants. All of them have been men.

This fact will change with the 66th officer, who took charge on Tuesday. The plaque will finally carry the name of woman as sub-inspector Syeda Ghazala has been given charge of the station.

Her appointment has set forth a new precedent as Ghazala became the first woman in the province to be given the charge of an entire police station. The appointment was confirmed through a notification issued by Additional IG Shahid Hayat and South DIG Abdul Khaliq Sheikh.

The notification was issued at around 4pm on Tuesday. By 6:10pm, Ghazala, dressed in her crisp uniform, arrived at the station to find herself surrounded by starry-eyed journalists. The uneasy male officers met their new boss as she roamed around the premises, taking in her new domain.

“It feels nice and no, I am not nervous,” she smiles broadly as she spoke to The Express Tribune. “Court, jail, thana (police station) are part of the routine life of every police officer.”

Ghazala started her police career in 1994, when she quit her job as a school teacher. She undertook training at Shahdadpur for three years and later in Karachi. She was inducted to the force as an ASI after the training.

During her career, she served as in-charge of a complaint cell in North Nazimabad and Saddar. She was posted as SHO of the South zone Women Police Station since 2003.

Ghazala feels there should be no discrimination between male and female officers. “We are treated the same way as the men,” she says. “We get the same kind of training on how to deal with criminals. There is no difference.” She wears a purple badge on her uniform – a symbol of gender equality.

Her throat is parched from all the talking and one of her male colleagues, who is trying to be on his best behaviour, shouts to a subordinate, “Madam kay liay paani laoo [Bring water for the madam].”

Ghazala seems to reveling in the attention she is receiving after taking over the charge from former SHO, Kenson Dean. “I had never thought I would be made the SHO,” she admits. “I will encourage other women to come up, work hard and take such challenges.” Coming from a women’s police station where she usually dealt with cases of domestic violence and abuse, Ghazala feels that in Clifton, she would be dealing with more street-crime incidents.

“Incidents of snatching and mugging hardly made their way to the women police station. But these crimes are common here,” she says. Admittedly, the increased workload will be hectic for the mother of four. But she is determined to pull it off.

At the police station, which is said to be ‘peaceful’ by the officers deployed there, and caters to a small area of Clifton Blocks 8, 9 and Zamzama commercial, the male colleagues did not look too excited at the prospects of having a female boss. They insisted, however, that they are happy. “Women run countries, then why can’t a woman head a police station?” asked one officer.

Another officer, Riaz Hussain, said that it was good that a woman had come to head the police station as she would run the place more strictly.

Ghazala plans to include a female duty officer along with a male ‘to facilitate the women so that there is no reluctance in registering complaints.’

The newly appointed SHO was to leave for snap-checking but a grenade attack in Zamazama changed her plans. Just an hour ago, she had remarked: “I just joined. God forbid that there should be any FIR to register.”