Bursti­ng onto the intern­ationa­l scene in 1989, Waqar was one of the pionee­rs of bowlin­g full and straig­ht.
By Taha Anis / Creative: Talha Khan
Published: April 9, 2014
Tweet Email 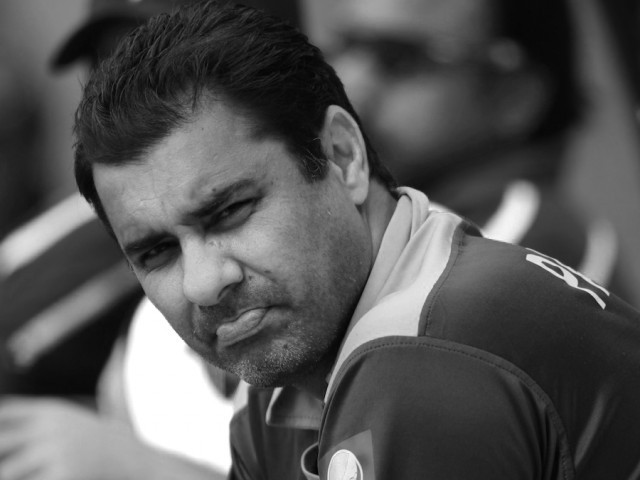 Despite over 400 ODI wickets and a reputation of being the most lethal Test bowler of all time, there are many who believe that Waqar failed to fulfil all of his precocious promises. PHOTO: AFP/FILE

Perhaps Waqar Younis’s greatest performance came when he was written off — past his prime, plagued by back problems and no longer possessing the searing pace that made him so lethal in his heyday.

In a crunch match of the rain-hit 2001 Natwest tri-series featuring Pakistan, England and Australia, Waqar – captain of the side – had added responsibility on his shoulder as Waseem Akram was out injured.

Bowling the first ball of the match to Marcus Trescothick, one of England’s finest opening batsmen, Waqar marked his run-up — almost half of what it was in the 90s. His run-up lacked the aggression that once characterised him, but the arrogant swagger was still there. His pace, once dangerously close to the 150 km/h mark, sometimes even crossing it, now hovered around 135 km/h. Trescothick was not facing the beast that haunted many a batsman back in the day, he was facing its mere shadow. The first ball, slower than 130 km/h, was a late swinging yorker, Waqar’s biggest weapon — once famously flooring Brian Lara. It was too good for Trescothick, the bat came down too late, the ball shattered the middle stump and Waqar, with just one swing of his slinging right arm, rolled back the years, bringing back images of an almost forgotten hero.

The wicket on the first ball was not where it ended though; the carnage, was just beginning. Nick Knight, Michael Vaughan, Owais Shah, Paul Collingwood, Alec Stewart and Dominic Cork all fell one after the other. In a remarkable 10-over long spell, Waqar claimed seven. Had England captain Alec Stewart not managed to negotiate him and briefly hold up one end, before ultimately perishing, Waqar may have had 10.

The English batsmen were completely at sea, every ball looked like it could deliver a wicket and balls which barely touched 130 km/h, seemed like 160 km/h to the hosts. That day, Waqar proved that while pace had traditionally been one of his greatest weapons, he was still one of the most dangerous bowlers in the world without it.

Waqar’s numbers, in terms of wicket-taking prowess, speak for themselves. Of bowlers with more than 200 wickets, he has the second-best strike rate in Tests (behind only Dale Steyn) and also the third-best in ODIs (behind Brett Lee and Saqlain Mushtaq), making him one of the most lethal bowlers in cricketing history.

Bursting onto the international scene in 1989, Waqar was one of the pioneers of bowling full and straight. With a penchant for swinging the ball ridiculously late, blessed with searing pace and the most dangerous yorker in cricket, the sight of Waqar reeling away in jubilation as the stumps went cart-wheeling was one that defined Pakistani cricket in the 90s.

Often seen furiously rubbing the ball on his trousers to shine one side, Waqar revolutionised the sport by revolutionising reverse swing, and hence was born perhaps the most deadly ball known in cricket — the reverse-swinging yorker.

While Waqar was often expensive, especially in contrast to the much more economical Akram, he was often Pakistan’s most reliable source of wickets. Usually bowling a six-over spell in the 15-over field restrictions and a four-over spell at the death, Waqar relished the challenge of facing batsmen that were looking to score runs against him. With a you-miss-I-hit philosophy and a reverse-swinging old ball, it was Waqar who, more often than not, came out on top in those duels. However, what made him all the more dangerous was his happy knack of taking wickets in chunks, and therefore turning entire matches on their heads. In ODIs, he has 13 five-wicket hauls to his name — Muttiah Muralitharan, who played nearly a 100 more ODIs than Waqar, is the only other player who has even reached double figures, with 10 five-wicket hauls. In only 262 matches, Waqar claimed four or more wickets on 27 occasions, yet another record.

Despite over 400 ODI wickets and a reputation of being the most lethal Test bowler of all time, there are many who believe that Waqar failed to fulfil all of his precocious promises.

Waqar was not always able to channel his aggression positively and often found himself in the midst of pavilion politics. At loggerheads with Akram for most of his career, they were a devastating duo on the pitch. However, off it, the two were at times barely on speaking terms.

As cricket becomes more and more batsman friendly and dead pitches become the norm, there is a chance that a bowler like Waqar may never be seen again — a terrible loss for the sport.