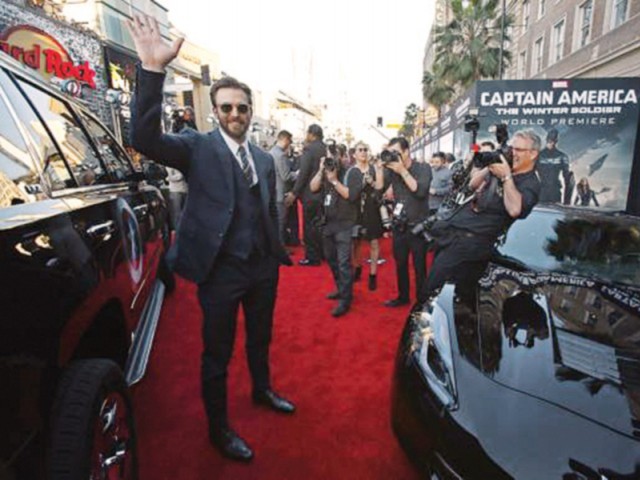 NEW YORK: Captain America: The Winter Soldier, the sequel to Marvel’s 2011 film about the red, white and blue superhero, smashed its way to $96.2 million in weekend ticket sales, setting a new record for an April release and speeding past last week’s winner, Noah.

Captain America, which stars Chris Evans as a scrawny World War Two reject, given super powers from an experimental serum, easily exceeded the April take for the racing movie Fast Five, which collected $86.2 million in ticket sales in April 2011.

Since Disney bought Marvel for $4 billion in 2009, Marvel characters have starred in some of Hollywood’s biggest hits. Iron Man 3 was last year’s second-highest grossing film with domestic ticket sales of $409 million, according to the site Box Office Mojo.

In 2012, Marvel’s The Avengers was the third-biggest film in Hollywood history, with $623.4 million in domestic sales and $1.5 billion worldwide.

Disney takes advantage of each hit by spinning it through its sprawling network of theme parks, TV studio and consumer products units. The movies sell well on DVD, and Disney will generate hefty revenue from sales of Captain America t-shirts, lunch boxes and action figures.

The company is also making four original live-action TV series for Netflix that will begin streaming next year.

“When you put the name Marvel on a movie, we think that it gives us essentially a head start with the audience,” Disney Chief Executive Bob Iger told analysts during a conference call in February.

Noah, starring Russell Crowe as the biblical figure, was second with $17 million in ticket sales from Friday to Sunday.

The dystopian action film Divergent was third with $13 million, for a total of $114 million since its March 21 release in US and Canadian theaters.

Captain America: The Winter Soldier also scored the biggest opening weekend of 2014, and took in another $9.6 million at IMAX screenings, for which moviegoers a premium.