Defeat US 3-2 on penalt­y kicks to round off a highly succes­sful campai­gn.
By Natasha Raheel
Published: April 7, 2014
Tweet Email 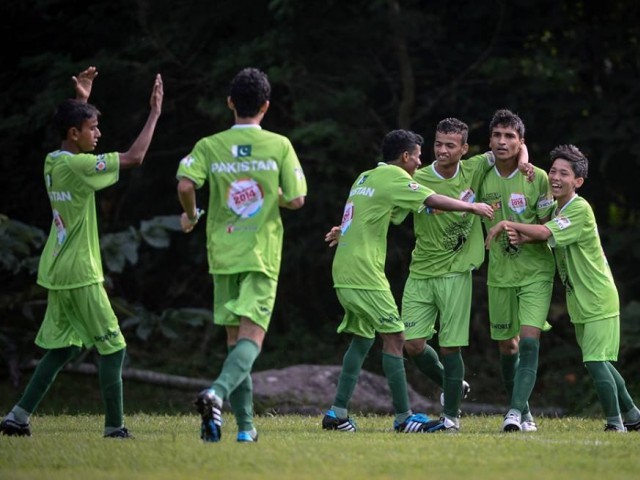 "Playing the final would’ve been amazing, but may be Allah has a better plan for us. We know that our team played well," says Azad Foundation official Itfan Maqboo. PHOTO: AFP/FILE

KARACHI: “Play with integrity, play with courage, you are playing for Pakistan.”

This was coach Abdul Rashid’s advice to Pakistan’s striker Aurangzeb Baba right after the side had confirmed a place in the quarter-finals of the Street Child World Cup (SCWC) 2014.

Team Pakistan appears to have taken the advice to heart as they defeated the US 3-2 on penalty kicks to clinch the SCWC 2014 bronze medal on Sunday.

“Even winning the bronze medal is alright for us,” Azad Foundation official Itfan Maqbool, who is with the team, told The Express Tribune. “We are happy… we’re congratulating each other anyway.”

“Playing the final would’ve been amazing, but may be Allah has a better plan for us. Maybe it is for the best. We know that our team played well,” he said.

The team began their 14-and-a-half-hour journey home after the closing ceremony at 2:30am in Rio de Janeiro, Brazil. They will reach Karachi 4:30am on Tuesday.

Maqbool said the players are looking forward to home after the exciting experience in Brazil. He added that so far the team only knows that they have played well and that people are noticing them.

“Right now the children have no idea of what’s going on outside the tournament,” said Maqbool. “They understand that people in Pakistan are supporting them but so far they are taking everything in slowly. They are absorbing everything that’s coming their way.”

The nine-member squad for Pakistan had a glorious run in the seven-a-side tournament before a heart-breaking defeat at the hands of Burundi in the semifinal. The team began its campaign with a bang, defeating arch-rivals and defending champions India 13-0, Kenya 2-0 and Mauritius 3-0 to top Group Three. Later they won the quarter-final against Philippines 3-2 on penalty-kicks.

The team remained undefeated in the tournament till Burundi edged past them 4-3 in the semi-final. Burundi, however, lost the final to Tanzania 3-1.

But the Pakistani side has recovered from the defeat quickly, instead of giving up on their dream.

“These children will realise what they have done later, probably once they get back home,” said Maqbool.

Hoping to catch the government’s eye

Team Pakistan’s performance in the SCWC is a milestone, and an eye-opener in many ways. The most important message of the event was to generate the government interest about the conditions of the children on the streets.

“This performance by our team is historic,” said Maqbool.

“Earlier, the government and other stakeholders wouldn’t pay attention to their issues but now this will compel them to take notice. These children have so much potential. Even in football, our children have natural talent; all they needed was to learn the rules and regulations. This achievement of theirs is a true triumph for the street children of Pakistan.”

He added that different NGOs have been demanding a system for shelters for these children.

“The core issue is that the policy should be made. We don’t have any system to notify the government about these children at the moment,” said Maqbool.