Street Child World Cup: Not the title, but Pakistani kids win a lot of hearts

Street Child World Cup: Not the title, but Pakistani kids win a lot of hearts

Nine member­s squad prove their worth not only as footba­llers, but also as brave indivi­duals.
By Natasha Raheel
Published: April 6, 2014
Tweet Email 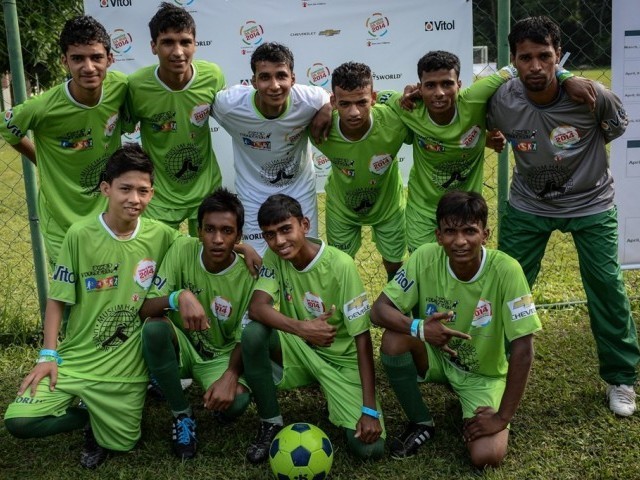 Pakistani players pose for photographers before the match against India, during the second edition of the Street Child World Cup in Rio de Janeiro, Brazil, on April 1, 2014. PHOTO: AFP/FILE

“What kind of response are we getting so far? Are people following us?” asked Itfan Maqbool while talking to The Express Tribune a few days ago.

Maqbool, an official accompanying Pakistan’s contingent in the Street Child World Cup 2014 taking place in Rio, Brazil, wasn’t aware of the attention the kids were getting half a world away, back home in Pakistan.

Team Pakistan was to play their quarter-final game against the Philippines. And their run to the semi-finals of the tournament had the attention of the nation.

They fell to Burundi 3-4 in a dramatic semi-final on Saturday, which they led 3-1 at the half, but the kids have won a lot of hearts – and not only back home.

“Everyone, the crowd and participants, chanted ‘Pakistan Zindabad’ with us after the match,” the Azad Foundation official told The Express Tribune right after the match. In a gesture worthy of an example for all sports at all levels, team Pakistan celebrated with Burundi on their win.  “These children have showed such a sporting spirit and appreciated Burundi for playing well.”

“Even a coach from England who works with English Premier League clubs praised our team. Everyone loved the way our boys played. They appreciated their game. Abdul Raziq and Aurangzeb Baba have made a great impression too, for their individual performances.”

The team topped Group Three scoring 18 goals in their four matches against teams including India (13-0), Kenya (2-0) Mauritius (3-0) and playing a draw with the US (1-1) in their campaign to qualify for the quarter-finals.

They also defeated the Philippines 3-2 to progress into the semi-finals of the seven-a-side tournament.

Pakistan remained the best team in terms of goal average. They scored 19 goals and conceded only one against the US, which was an own goal in the unfortunate moment by a Pakistani defender.

The long road to Rio

Pakistan’s incredible success at the SCWC in Brazil is not a fluke; in fact the nine players in the squad proved their worth not only as footballers, but also as brave individuals.

These children have overcome the life of being homeless, exposed to violence, drugs and petty crimes before taking part in the SCWC.

All but one player were selected from the mean streets of Karachi after a vigorous talent-hunt by the Azad Foundation in the impoverished localities of the country.

The final phase to prepare for Rio began in November last year in Ibrahim Hyderi, while the SCWC co-founder Chris Rose also witnessed the match among the local teams.

The selection criteria was based upon a child’s experience living homeless and their rehabilitation process besides their football skills, which was accessed by the coaches.

But the most interesting fact remains that the Pakistan Football Federation was not involved in the process.

Azad Foundation coach Abdul Rashid, who groomed the players in three months, and only took one month to exclusively train the nine-players for the tournament said the journey for him has changed his life along with the players.

“It’s an amazing experience, training these kids has also changed me,” said Rashid. “We’ve lived together at the Sharafi Goth football ground, I know each one of them like a family member, and now I can only say that their performance can speak of their talent.”

Rashid said that for the players, it’s more than just a game. Most of the children in the camp have faced hardships, a period of abandonment and most importantly each player had to find a way to get out of the street from within.

“They have been exposed to many things, some of them were also into drugs, but now they are the role models to learn from,” said Rashid. “Each of them had a rough life on the streets but they realised that they can change their situation by coming to the shelter homes.

‘That was their first step to coming back to the normal life. None of these children had been trained before. But they have been very quick to learn the techniques.”

Rashid empahsised that participating in the SCWC, however, has given them a new motivation to live.

Owais Ali, the 15-year-old from New Karachi, said his biggest joy is to represent Pakistan internationally.

Owais now goes to school and lives with his mother.

“I had run away from my home because my father used to beat me,” said Owais. “I must be seven years old. I’d spent three-four years alone. But it all changed when I came to the shelter. I remember meeting with my mother after seven years. She just kept crying when she saw me. When I asked her why was she crying she told me that she missed me but at the same time she thought that I had forgotten her.”

Owais’ story resonates with other team-members as well. Each of them ran away from home due to the fighting in their families.

“I’m playing for my mother, because I’m all she has. She was very happy to see me play football again. I had always loved playing football, but I stopped playing it when I was on the streets,” said the team’s mid-fielder.

The most crucial part for these layers had been reuniting with their families.

This is the stage where NGOs like Azad Foundation work. They trace the families so that these children can go back to their lives and better human beings who can support their loved ones.

“I lived on the streets for four years, it wasn’t easy,” said Hussain. “Battled with things, but now I’m here. I come from a Bengali family. I have five brothers, but I had left home because my parents wouldn’t talk to me. Now it’s different. I don’t go to the school but I learned technical skills in the shelter home. Besides football, I love to cook; I’ve even cooked for the team when we were in the camp. I want to become a chef.

“But at the same time I will come back from Brazil and work with other street children too. I’ll tell them that they need to change their situation on their own, they need to help themselves first,” said Salman.

On the other hand, Pakistan top scorer in the tournament Abdul Raziq said he always wanted to be a footballer. Raziq had told The Express Tribune, before leaving for Brazil, that he wanted to make a career in the sport. He used to set up a fruit stall in Mauripur. Rashid said he picked up Raziq from outside a football ground.

“I used to roam around on the streets. Sometimes I would put a make-shift fruit stall near the football stadiums so that I could see people play. I’ve always loved football, I want to play like [Lionel] Messi,” said Raziq.

According to Rashid, the teenager would never talk to others but his personality changes when he plays football.

“Aurangzeb is always very silent. He doesn’t talk much, but he observes. Earlier, he would get very scared if anyone tried to communicate with him, he wouldn’t tell his story when he came to the shelter, but he is a very bold player,” said Rashid.

Aurangzeb has made his coach proud. He scored a hat-trick against Mauritius 3-0 in the Group Three match, and also scored against India, the US and Kenya.

According to Maqbool, the most difficult phase for the team was to get the visas for Brazil.

“None of these children had any documents, even their parents don’t have their proper documents and identity cards, so it was very challenging to collect every child’s documents and apply for the visa. We really needed some understanding and help from the passport department of country… but they didn’t cooperate with us at all. In fact, reaching Rio was the biggest achievement for us,” said Maqbool.

“The system didn’t help us, but some individuals understood us and helped these children. Till March 26, I was still running to get two passports from Islamabad. It was the most difficult thing.”

The team landed in Rio on March 28 after a 14.5-hour flight and played their
first match against India on April 1.

With the team’s success Maqbool said he is receiving calls from the Sindh governor and other officials now.

“Now I’m getting calls, but initially the system didn’t work for us, didn’t help us. I hope this win from our team is not just a triumph on the football field, but also for the street children all over the country,” said Maqbool.