Accord­ing to the Azad Founda­tion direct­or, the most diffic­ult phase for the team was to get the visas for Brazil.
By Natasha Raheel
Published: April 5, 2014
Tweet Email 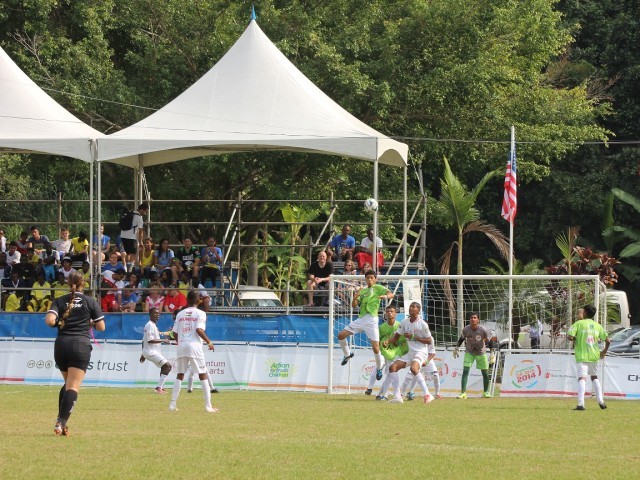 The team landed in Rio on March 28 after a 14.5 hour flight and played their first match against India (13-0) on April 1. PHOTO: AZAD FOUNDATION

KARACHI: No one saw this coming: The Street Child Football World Cup (SCWC) Pakistan team reaching Brazil and playing brilliantly in the tournament.

According to the Azad Foundation director Itfan Maqbool, the most difficult phase for the team was to get the visas for Brazil.

“None of these children had any documents, even their parents don’t have their proper documents and identity cards, so it was very challenging to collect every child’s documents and apply for the visa. We really needed some understanding and help from the passport department of country, but they didn’t co-operate with us at all. In fact reaching Rio was the biggest achievement for us,” said Maqbool.

“The system didn’t help us, but some individuals understood us and helped these children. Till March 26 I was still running to get two passports from Islamabad. It was the most difficult thing.”

With the team’s success Maqbool said that he is receiving calls from Governor Sindh and other officials now.

“Now I’m getting the call, but initially the system didn’t work for us, didn’t help us. I hope this win from our team is not just a triumph on the football field, but also for the street children all over the country,” said Maqbool.

Previously, the team topped the Group Three scoring 18 goals in their four matches against teams including India (13-0), Kenya (2-0) Mauritius (3-0) and playing a draw with US (1-1) in their campaign to qualify for the quarter-finals and later they defeated the Phillipines 3-2 to reach the semi-finals.

The US will face Tanzania in the first semi-final. Pakistan will take the field against Burundi in the second semi-final on Saturday (today) at 7:30pm PST.

From Pakistan to China: PM to visit China for Boao Forum