The releas­ed prison­ers will be from the list provid­ed by TTP to the govern­ment
By Qamar Zaman / Web Desk
Published: April 5, 2014
Tweet Email 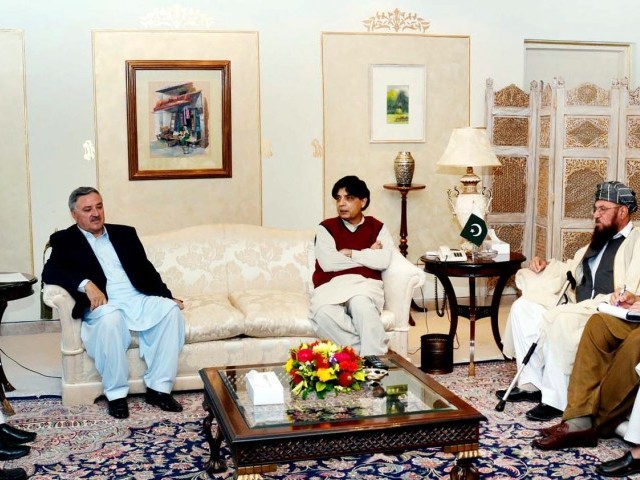 Chaudhry Nisar in a joint meeting of the government and Taliban committees in Islamabad on Saturday. PHOTO: PPI

ISLAMABAD: After meeting with the Tehreek-e-Taliban (TTP) committee on Saturday, Interior Minister Chaudhry Nisar said that they have decided to release 12-13 more Taliban prisoners.

The next batch of released prisoners will be from a list provided by the TTP, he said during a short media talk after a meeting between the two committees.

“The number would be around 30 when two sides would be meeting for the second round of their face to face talks,” he said.

Nisar added that the talks are now proceeding positively adding that the TTP should also release the prisoners they are holding as well. He said that there was no justification for the TTP to keep the high-profile prisoners in continued captivity.

“We have asked them for release of Professor Ajmal, sons of former Prime Minister Yousaf Raza Gilani and some foreigners and public servants,” he added.

Nisar also said the real issues/demands from both the sides, have yet to come.

“We will send our team with real demands and want the other side as well to let us know about theirs when both sides would meet next week,” Nisar said.

“The government has one point agenda of gaining peace while being within the limits of the Constitution,” he explained.

Later, TTP committee leader Maulana Samiul Haq said that the second round of talks is expected during the next two-three days.

He added that the venue and timetable of the dialogue are being sorted out.

Maulana Samiul Haq said that Saturday’s meeting deliberated upon measures to promote an atmosphere of goodwill.

Earlier on Saturday, the government committee met just before their meeting with the TTP committee to discuss the release of non-combatant TTP prisoners, according to Express News.

Interior Minister Chaudhry Nisar confirmed the release of the TTP prisoners and the government committee appreciated the interior ministry’s efforts.