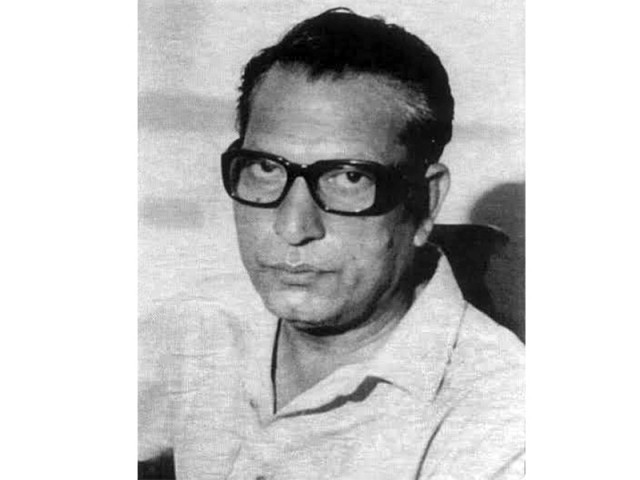 Aftab Iqbal Shamim talks on poets, poetry and everything in between.

RAWALPINDI: An answer on an exam sheet was so perfectly worded that it was accepted as is by the opinion pages of a national daily, thanks to the examiner.

Aftab Iqbal Shamim was the student. Soon after this incident, he was made editor of the college magazine. The encouragement given by Dr Safdar Hussain went a long way in making Shamim what he is today.

He now has four collections of nazms (poems) to his credit  “Farda Nizhad”, “Zaid se Mukalma”, “Gum Samandar” and “Mein Nazm Likhta  Houn” and one of ghazals entitled “Saya Naward”.

Born in Jhelum in 1933, eminent poet Aftab Iqbal Shamim did his masters in English and Urdu from Gordon College, Rawalpindi. Later, he taught at the same college for over quarter of a century.

Talking to The Express Tribune, he spoke on his literary journey, encouragements, and disappointments with contemporary literature.

Giving his preference for nazm, he said, “I prefer nazm over ghazal. The world has changed. We are living in a global village now. The human being is being dehumanised. We can’t resist it through ghazal. Nazm is the answer.”

Continuing, he said, “I was under the influence of the progressive movement. Those were the days when ghazal-writers held sway and nazm-writers were denied invitations, even to literary meetings. Nazms never got any response. I still remember the audience used to listen to nazms with no reactions whatsoever.” But he never lost heart and kept writing nazms that were regularly published in literary magazines such as Adabi Dunya and Funoon. “After five decades, finally the nazm has found acceptance. Things have changed to that extent that nazm-mushairas (recitals) are now held frequently. Even the best ghazal-writers have started writing nazms now.”

In response to a query on why he turned to ghazals, he explained, “I taught at Beijing University for twelve years. There I turned to ghazal-writing. The reason was to fill the cultural gap which I felt there and this was also an attempt to integrate myself with our own centuries-old cultural tradition of ghazal.”

Recounting his early days, Shamim said, “I developed a taste for poetry during college days. In those days, teachers were more than just teachers to students.  Professor Rafique Mehmood and Professor Ikramul Haq gave me two books and asked me to tell them which one I liked the most. One was Faiz Ahmed Faiz’s Daste Saba and the other one was Noon Meem Rashid’s Maavara. That’s how my interest in literature grew, and thus began my literary journey.”

Critiquing the critics, he said today’s literary criticism has no direction. Progressives found good critics in Ehtesham Hussain, Ale Ahmad Suroor and many others. Later on, Dr. Wazir Agha also joined their ranks.

He said “a poet must also be a critic. In Urdu, poet-critics were in abundance in the past. In English literature there were Coleridge, TS Eliot and others. A critic must be very honest and impartial. They must be aware of the contemporary criticism being written and must have deep knowledge of literature.”

“A continuous wave of newly-published books of poetry and fiction, which can hardly be termed as works of literature, gives rise to suspicion of collaboration between the publishers and their agents to mint money,” said Shamim, while at the same time expressing hope by quoting the novels such as “Ghulam Bagh” by Mirza Ather Baig.

“Literature is the real history that captures life in the streets and its most minute details,” he said as a parting note.