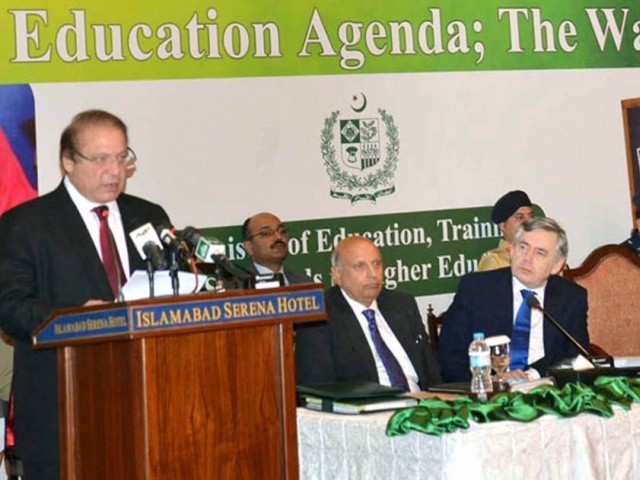 ISLAMABAD: Prime Minister Nawaz Sharif on Saturday unveiled plans to launch a countrywide literacy movement to ensure the enrollment of every child in school, with aims to allocate four per cent of GDP on education by 2018.

“Our effort is to achieve the targets, set by Education for All (EFA) and Millennium Development Goals (MDGs) within the coming three years.”

Among the targets set by UNESCO is to increase resources for the education sector to reach four per cent of GDP by the year 2018, Nawaz said as he inaugurated the international conference on ‘Unfinished Agenda in Education: the Way Forward’.

The prime minister said the government’s objective was to develop an education system which is compatible with the requirements of a knowledge-based economy.

Nawaz stressed that focus is needed on science and technology and developing modern skills in the education system, besides calling for prioritisation of female education in education policy, effective participation of women in the decision-making process and to protect their respect and dignity.

“For Pakistan, education was not merely a matter of priority, but it is the future of Pakistan, which lies in its educated youth.

“It has, in fact, become a national emergency. More than half of the country’s population is below 25 years of age. With proper education and training, this huge reservoir of human capital can offer us an edge in the race for growth and prosperity in the age of globalisation. Without education, this resource can turn into a burden,” the prime minister said.

With low budget allocations for education a primary concern, along with a very high number of out of school children, high drop-out rates, gender disparity, low literacy rate, realising the MDGs and EFA targets was a priority.

Not forgetting the 18th amendment, Nawaz said that despite education being a provincial subject, there was national consensus on the need for reform and modernisation of the country’s educational system to bring it at par with the national priorities and international standards.

“I believe that education is not an expense,  but an investment into the future. Rather, it is the best investment an individual, parent or nation can make.”

In this regard, he directed the Planning Commission to give education top priority in their Vision 2025 programme.

Nawaz noted the contribution of the private sector to education in Pakistan.

“Out of the 14.4 million primary stage enrolments, 4.8 million i.e. 34 per cent are enrolled in private sector schools. Private sector share is much higher at the lower, middle and secondary levels,” the prime minister added.

Lauding the role of UN agencies, NGOs, civil society, religious institutions, delivery agents, and donors’ community, he invited everyone to join the government in its mission to educate and train Pakistan’s youth.

“I have no doubt that they can turn around all our challenges into opportunities. They also have the potential to contribute immensely and positively to world peace and prosperity.”

Sharing his views on successful democratic transition in Pakistan, the prime minister dreamed of a Pakistan where every citizen gets educated in the real sense and thereby contributes to the development of the country.

Addressing the conference, special envoy of the UN Secretary General on education Gordon Brown noted the performance and commitment of the government to meet literacy targets by doubling the education budget, and unveiling a national action plan.

He said the passage of pre-requisite laws by the provincial assemblies was a good step and added that the international community also received and responded to the government’s message showing its resolve to get every child in school by 2015.

Brown said the global partnership for education had committed $100 million, the USAID $140 million and the European community $100 million, besides support from Saudi Arabia, United Nations and other countries.

The UN special envoy asked the government to chalk out a plan to meet the literacy target by 2015 and assured all-out support from the international community.

It should not be obstacled by lack of funds, he added.

Brown said the government should draw a timetable showing the world its achievements in the education sector and he would persuade the international community to extend maximum possible support to accomplish the task.