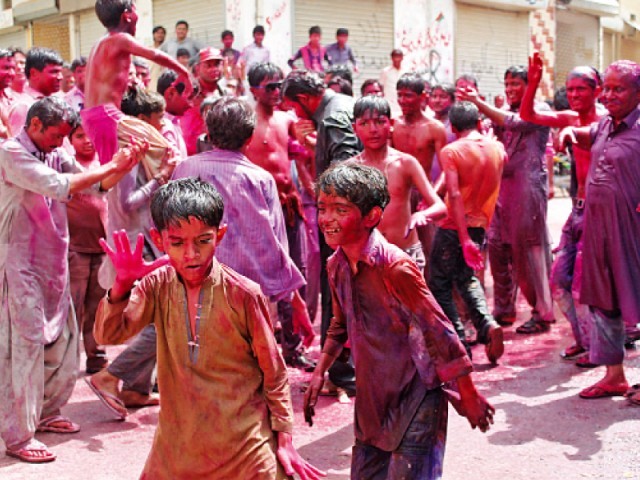 Hindu families of Umerkot and its adjoining areas celebrate Holi as the district faces one of the worst bouts of drought and famine. Residents say even through all the misery, they celebrate to give thanks for all they are grateful are. PHOTO: TOOBA MASOOD/EXPRESS

It is the second day of Holi in Umerkot. PTI MNA Lal Malhi is receiving a stream of revellers at his home. Their hands fuschia, they are served lassi and plates of ghevar — crisp and sticky, these yellow noodle-thin strands are syrupy sweet. Chairs line the walls of a long reception area, leading the way to a high-backed leather armchair, the tallest chair in the room.

Malhi is perched on a chair next to this imposing seat — his face and hands a deep aubergine, his chest speckled with glitter, he’s trying not to colour all that he touches.

“People asked me today how they should celebrate,” he says, referring to the news of riots and the destruction of a temple in Larkana on Sunday, the first day of Holi. “The news from Larkana has left a weight on our hearts but we’re also thinking of all those families in the villages, those who have migrated, those who have lost their children.” Malhi told his constituents to celebrate as they always have, to give thanks for all they are grateful for. “Whatever happened yesterday or what happens today, Allah maalik hai,” he says. “There will be more bad times and more good times, but we should celebrate now without fear.”

He says celebrations have been affected by the situation in Thar. “Whenever there is a crisis of this sort in Pakistan, you have to remember that the first to be affected are children, women and the minority groups.” A journalist and human rights activist before he entered politics, Malhi has been keeping close tabs on how the situation in Thar has been reported. “Nothing has been reported wrong and nothing has been exaggerated — it’s just that this is the first time the national media has picked up the news,” he says.

He points out that the Sindhi language media has reported on the situation as it occurs every year. “Some are saying that this is not a big deal, it happens every year,” he says, “But the question getting lost in this discussion is — why does it happen every year? The Sindhi media cries about it every year, and every year they are ignored. If this is nothing new, then why is it nothing new?” If the annual migration of Thari families is ‘not new’, he adds, then why is that so? “Before 1947, they did not need to migrate in such large numbers,” he says, “There was an efficient system set up to provide for these families, which does not exist now.”

Villagers in Jageh jo Thar, a 10-minute drive from Mithi, say that they have received several visitors since news of the drought made front-page news, but all say they have not actually spoken with any journalists. “Photo nikaalnay bohot log aye,” says Taj Mohammed, referring not just to news photographers but to political leaders who flit from one location to the next, pausing for a handshake and a photo-call.

Sohni, who says she has forgotten how old she might be, speaks only a Sindhi dialect, but expertly trains her gaze towards the camera; the translator, a local, remarks, “Inn ki bohot movies bananay aatay hain.” A local journalist for a Sindhi-language newspaper, the translator says the tide of newsmen has stemmed over the last two days. He distinguishes between the coverage in print media and on television, saying that while those journalists writing for English-language newspapers prefer to remain in Mithi, television crews have made the trek to the district’s villages. Those who visit the villages, he says, have to contend not just with a language barrier, but with male members of the village who often insist on speaking on behalf of the women.

As journalists from international and national organisations flocked to the district, he says they encountered a way of life alien to theirs — consider for instance that when you ask Sohni how she makes her livelihood, she shows you the bundles of twigs and sticks that she sells as firewood or bunches of leaves stripped from the village’s trees and sold to be used in fodder.

Ask her how much she charges per bundle and she looks confused. “Per bundle? However much I can fit on a cow’s back is sold for Rs200, what fits on a camel’s back is Rs300 and the amount I can carry on my head is sold for Rs40 to Rs50,” she explains. “There is a disconnect between the reality here and what is printed in the papers, between what the district reporters file and what the editors in their cities put together,” the translator says, “The media comes with their minds set about a story or they’ll file desk stories or find information online.”

The villagers say that it is not the drought that is the problem, but the process of distributing relief goods. Taj Mohammed says he has yet to receive any free-of-cost or subsidised wheat, as he waits on the village’s schoolmaster to compile a list of families in the village to submit to the authorities dispensing relief.

“Fair distribution is not possible,” feels MNA Lal Malhi. He contends that the government’s estimation of the number of drought-stricken families is incorrect. “If 100 bags of wheat are provided for a locality, you can assume that 30 will be provided to the MNA there — and he distributes it at his discretion,” he says. He points out that relief items from 2010’s drought have yet to be distributed.

The problem of misappropriated funds, however, has firmly entrenched roots. “If 75 per cent of funds allocated to medical or social work in any area in Pakistan is eaten up by government officials, imagine what happens to the small percentage of funds allotted to religious minorities,” says a local in Umerkot. “Go to Punjab,” he says, “The roads are made of glass there and here, in the district’s headquarters, the roads are terrible even inside the city.”

In Umerkot, Mithi and the villages encircling Mithi, there is little talk of the drought. The discussion inevitably veers towards problems that are only exacerbated by the drought. Ghansham Das, who maintains the Shiv mandir in Umerkot — the largest temple in a district of close to 100 mandirs — points out, “What is the problem here? We don’t have clean water. We aren’t a population of crores, it’s not impossible for the government or NGOs working in the area to give us access to clean water.” The water available is often tinged with chemicals or arsenic from fertilisers, he says, which leads to problems of gout in the area’s population.

While many point out the inaccuracies in the media’s depiction of the crisis, Malhi says such interest on a national level can only benefit the people of Thar. “One of the best things is that the media demands authenticity,” he says. “The authorities and officials in hospitals have had to provide updated figures or information for the media’s consumption and so this is the first time that the true nature of the crisis in Thar is being reported nationally.”