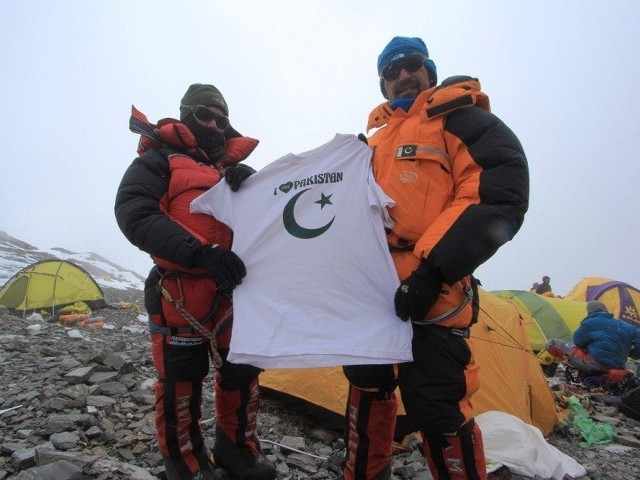 Samina Baig and Mirza Ali holding up their favourite shirt while scaling a mountain. PHOTO: mirzaadventure.blogspot.com

In their quest to climb the highest mountains on each of the seven continents, mountaineer siblings Samina Baig and Mirza Ali successfully scaled Carstensz Pyramid on the Australian continental shelf on Wednesday.

The 4,884-metre high mountain, also known as Puncak Jaya, is the fourth peak the brother-sister duo from Gilgit-Baltistan’s Shimshal valley have climbed since they started their expedition in November 2013.

They are only three peaks away now from completing their “Seven Summits” goal, which they have dedicated to women’s empowerment, gender equality and environmental conservation.

The Alpine Club of Pakistan had earlier stated that if Baig and Ali scale each continent’s highest mountain, they will become the only siblings in the world to have achieved this mountaineering challenge together.

The Adventure Diplomacy Group, which was especially set up to support the duo’s Seven Summits campaign, confirmed the successful ascent in a press release issued on Wednesday.

“After a six-hour long, gruelling climb, the siblings jointly hoisted the Pakistani flag on top of the mountain this morning at 4:40 am Pakistan Standard Time,” the release stated.

The group consists of the Serena chain of hotels and the embassies of Argentina, Indonesia, Nepal, Russia and the US. It has been providing logistical and diplomatic support to the mountaineers.

Baig and Ali’s expedition is financially supported by a Pakistani-Canadian philanthropist, an American woman and a group of New Zealanders.

The mountaineering duo had successfully climbed the 6,962-metre Mount Aconcagua in Argentina in December, Mount Vinson in Antarctica in January and Mount Kilimanjaro in Africa in February.

They made a brief stop in Pakistan in February before moving to New Guinea island in the Indonesian province of Papua where the Carstensz Pyramid is located.

The mountain is believed to be the toughest and most technical climb among the tallest mountains on each of the seven continents, according to the mountain’s description on adventure sports website xtremesport4u.com.

“We are so thankful to have made it to the top today after six hours of hard climbing. It feels really great to be here,” according to the Adventure Diplomacy Group who quoted the siblings from a telephonic message they had left after they climbed the peak.

Baig has already climbed the Asia’s tallest mountain Mount Everest in 2013, becoming only the first Pakistani woman to achieve the feat. Ali will give it a try in April.

The siblings will then attempt to climb Mount Denali in the US and Mount Elbrus in Russia in the summer.