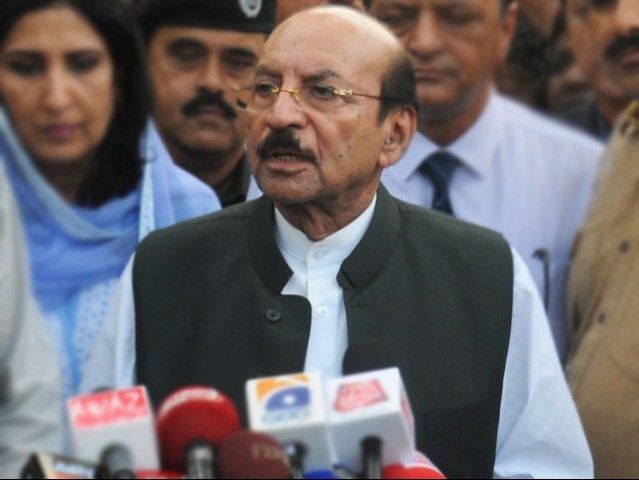 Not content with holding the charge of 15 different departments, the Sindh chief minister presides over more than a dozen boards of directors. PHOTO: EXPRESS/FILE

Age certainly has not withered Sindh Chief Minister Qaim Ali Shah, nor wearied him of the cumbersome job he holds down. His detractors may have written him off far too many times before, only to find him perched again on the Sindh throne, ever so active. Holding multiple portfolios of ministries and departments, Mr Shah has unlimited authority concentrated in his hands. This obviously could not go unchallenged any longer — opposition howls and hollers greeted him in a recent Sindh Assembly session, and justifiably so.

At issue is not so much the concentration of powers in the province’s chief executive’s hands as the double standards this represents. For Sindh has been at the forefront of demanding more powers and autonomy from the centre since the adoption of the Eighteenth Amendment. While the province is perfectly justified in airing this demand, it needs to look inwardly also as to how it devolves its own powers to the grassroots administrative units it controls. As a report in this paper fittingly points out, a stark example of a hypocritical attitude can be found in the powers of authorities and boards that have been placed under the control of the chief minister. Not content with holding the charge of 15 different departments, the Sindh chief minister presides over more than a dozen boards of directors. By contrast, the provincial administration is loathe to the idea of delegating powers to districts, a reason why it tends to shirk from holding the long-delayed local government elections. The leader of opposition in the Sindh Assembly was bang on target when he wondered aloud that if municipal services are handed over to the chief minister, what will be the responsibility of the local government? Instead of vesting too many powers in one person, the province will do well to prove its administration’s democratic credentials by passing on the authority to the grassroot units where they rightly belong.

Two men injured, one arrested after Rangers fire on ‘runaway bikers’ in Karachi