Group had been due to kick off the Austra­lia and New Zealan­d leg of their world tour.
By Reuters
Published: March 19, 2014
Tweet Email 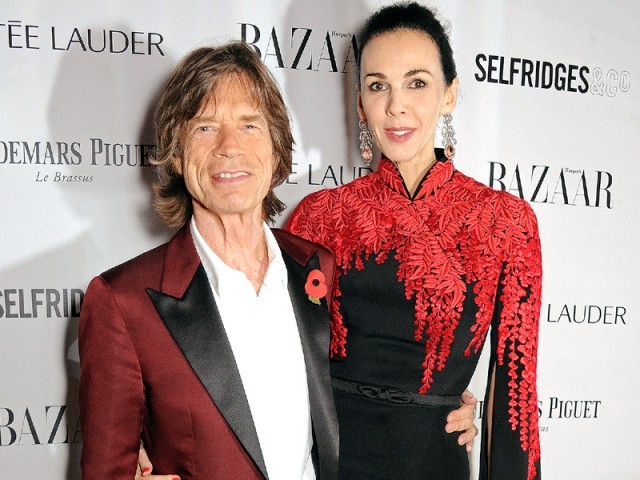 Scott and Jagger were often seen at celebrity events, with the six-foot, three-inch tall former model towering over her rock-star boyfriend. PHOTO: FILE

The Rolling Stones called off their tour in Australia and New Zealand on Tuesday after lead singer Mick Jagger’s girlfriend, L’Wren Scott, was found dead of an apparent suicide in her Manhattan apartment.

Scott, a 49-year-old fashion designer and former model, was found hanging from a scarf on Monday in a high-rise apartment building in the upscale Chelsea neighbourhood.

“The Rolling Stones are deeply sorry and disappointed to announce the postponement of the rest of their 14 ON FIRE tour of Australia and New Zealand following the death of L’Wren Scott,” the group said in a statement.

The group’s Australian publicist asked fans to hold on to their tickets until an update was made. The group had been due to kick off a seven-concert Australia and New Zealand leg of their world tour on Wednesday in Perth in Western Australia.

Jagger, 70, who had been dating Scott since 2001, said he had spent many wonderful years with the acclaimed designer.

“I am still struggling to understand how my lover and best friend could end her life in this tragic way,” he said in a post on his official website, mickjagger.com. “She had great presence and her talent was much admired, not least by me.”

Scott’s publicist said funeral details had not been confirmed.

Scott became one of New York’s most famous designers over the last decade and was best known for her slim-fitting, dresses in beautiful fabrics and fine details. News of Scott’s tragic death shocked friends, clients and fellow designers.

Pop singer Madonna, in a statement, described Scott’s death as “horrible and tragic.” Supermodel Naomi Campbell, who knew Scott for many years, said she was the “epitome of elegance and femininity.”

Scott and Jagger were often seen at celebrity events, with the six-foot, three-inch tall former model towering over her rock-star boyfriend.

It was unclear if the designer had shown any signs in her work or personal life indicating she was depressed or suicidal.

Although Hollywood stars such as Nicole Kidman, Amy Adams and Penelope Cruz were pictured in Scott’s sleek, form-fitting creations on the red carpet, her company had mounting debts.

Accounts filed with Britain’s Companies House in October show that Scott’s LS Fashion Ltd ran a loss of 4.3million euros ($5.99 million) in 2012, up from 3million euros the year before.

Did you know?: Shakira has a foolproof method in the studio