Maker of Revo talks about its re-launch

Maker of Revo talks about its re-launch 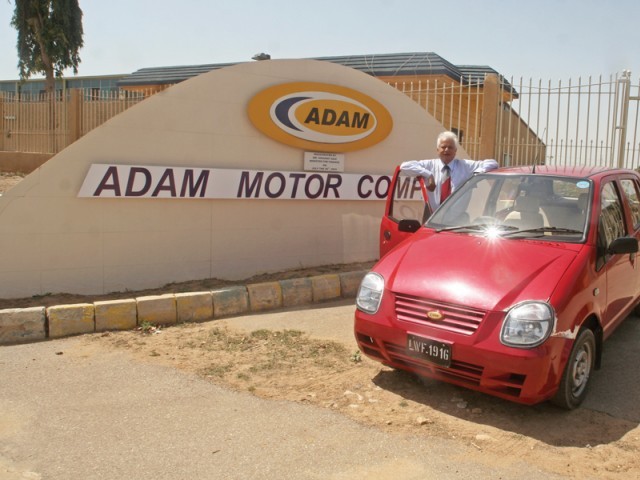 If Adam Motor re-launches Revo, then its price would be around Rs600,000 owing to the depreciation of the Pakistani rupee since 2005. PHOTO: ATHAR KHAN/EXPRESS

KARACHI: When the country’s premier expressed a desire for a ‘made in Pakistan’ vehicle at the recently-held auto show in Lahore, he had probably forgotten about Adam Revo — Pakistan’s first locally produced car that made an entry nine years ago.

Among the attentive audience was Feroz Khan, the maker of Revo, who was astonished at the silence of the industry giants present at the Lahore Expo Centre where Prime Minister Nawaz Sharif made the remark.

“I felt hurt when none of my life-long friends stood up and informed the prime minister that Pakistan had already succeeded in producing a local car in 2005,” Khan told The Express Tribune in an interview. “Add to this the maker of that car was sitting right before him in the audience.”

Adam Motors, the makers of Revo, launched the car on April 18, 2005 with high hopes. However, the company sold just 600 units before it broke down owing to a lack of working capital. Former prime minister Shaukat Aziz inaugurated Revo’s plant in 2003, located a few kilometres from Karachi, owing to which most units were sold in the city.

According to Khan, Aziz promised him to buy his car for the government as it was the cheapest in the country. The government could have easily bought 5,000-10,000 cars a year but it never fulfilled its promise and that, according to Khan, was one of the major reasons why the project collapsed.

When launched, Revo’s price was Rs269,000 — cheaper by Rs46,000 when compared to the more popular choice of Suzuki Mehran.

Asked whether he could re-launch Revo, Khan reluctantly said that it could “within 15 months after studying the current needs of the industry”.

Khan’s reluctance to take another risk is understandable. He still owes Rs230 million despite paying a large part of the Rs1-billion debt he accumulated in launching Revo.

If Adam Motor re-launches Revo, then its price would be around Rs600,000 owing to the depreciation of the Pakistani rupee since 2005, Khan said.

“This is a better time to produce a local car as prices have gone up way too high owing to the expensive imported parts,” said Khan. “But I must say that I am fearful in re-launching Revo because of this country’s politics.”

Despite difficulty in procuring its spare parts, one can still find Revo on roads after all this time.

Those who still use the car say some of the attractive characteristics of Revo are its strong body and spacious interior.

Khan believes Pakistan can achieve more milestones in the future because of the position where its auto industry stands today. However, for that to happen, the local industry needs to work hard especially if it wants to prepare itself for regional competition.

Pakistan’s auto industry also needs to study non-tariff barriers (NTBs) in India and then apply the same if they fail in exporting their parts to India because of them, he added.

“Pakistan can export auto parts to India but then it needs to upgrade its standards such as environment, pollution, vehicle inspection etc,” he stressed.